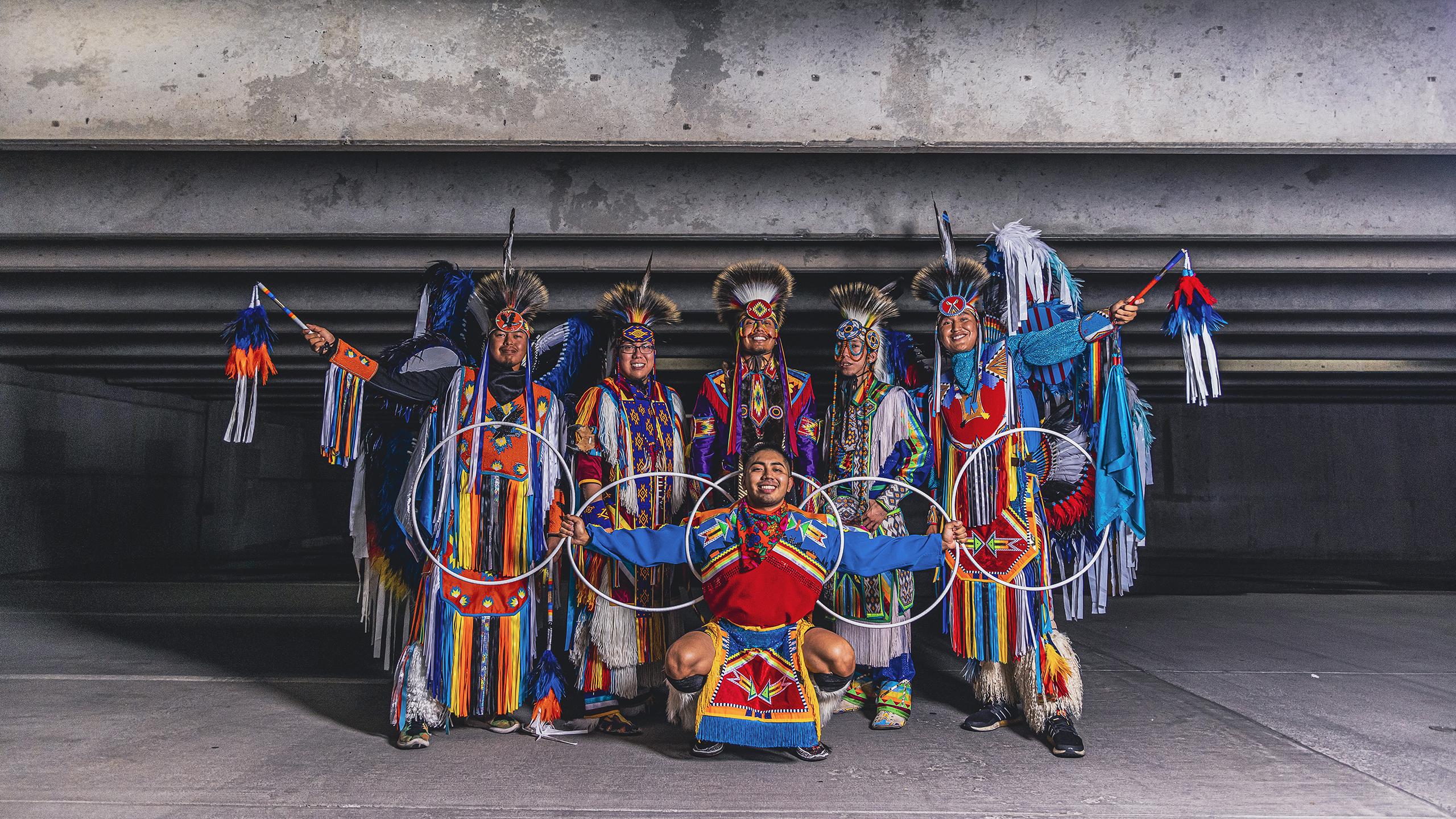 Indigenous Enterprise, an indigenous dance troupe from across Turtle Island, made their national debut at Toronto Metropolitan University (TMU), with their performance titled native liberation as part of the eighth annual Fall For Dance North festival lineup.

The performances, which took place at the Creative School Theater on October 7 and 8, explored an array of traditional dances and their origin stories through movement and filmmaking. Projected animations depicting the story behind each dance set the stage for the incoming performer. The screen lit up with vibrant visuals to complement the captivating performances and the dancers’ stunning regalia, while ensuring that each dancer received the spotlight they deserve.

Through movement and storytelling, the group seeks to educate the public about Indigenity while simultaneously preserving and transmitting traditional practices; an act of resistance against colonialism within systems that have historically sought to suppress Indigenous peoples.

native liberation began with a narrator providing context for the dances to come.

“Song and dance are universal and a common thread that everyone connects to,” the narrator said. “Yet at some point our cultural dances and traditions and even our languages ​​were stripped from us and forbidden to us, taking away the very essence of who we are as a people.”

One by one, the eight dancers take the stage. The dancers’ furrowed brows and deep concentration turned into expressions of joy and release as the audience cheered them on, matching the energy of the troupe.

During the 60-minute performance, Indigenous Enterprise presented traditional dances from across Turtle Island.

Colorful animations located the story of the Grass Dance as originating from the Omaha people of the northern Great Plains. Then came the Blackfoot Roots Chicken Dance. Then the screen lit up for Women’s Fancy Dance, which has many origins and cannot be traced back to one place. Men’s Fancy War Dance originating from the Ponca tribe in Nebraska followed. Then, an Ojibwa jingle dress dance and a Taos Pueblo hoop dance closed the first part of the show.

Each dance began with the lights dimmed to make way for animation showcasing the origin story of the dance, as told by ancestral oral histories. After each video, the lights came on and a cast member performed the accompanying dance.

Audiences were captivated by the cast’s stage presence as well as the care and beauty brought to the production.

Shirley then returned to the stage to engage directly with the audience after the performances. He introduced the performers to the crowd and even hosted a Hoop Dance-off between dancers Jorge Gonzales and Nanabah Keediniihii.

The show ended with the lights dimmed and spotlights illuminating the eight dancers as they returned to the stage. The music started up again and each dancer started performing a different style of dance simultaneously. The troupe moved to the beat of the drum beating in the background. Light bounced off the metallic ribbons adorning Keediniihii’s dress, creating an almost disco ball effect in the room.

When the show ended, the music crescendoed, the dancers froze, and the lights went out one last time.

native liberation portrays stories of resilience, healing and resistance while also being a catalyst for it.

Freddy Gipp, a registered member of the Apache Tribe of Oklahoma and a dancer with Indigenous Enterprise, said the performance was a way for the troupe to show the resilience of Indigenous peoples across Turtle Island, while creating a space to transmit and share traditional knowledge.

With the university only recently changing its name in April, Gipp said playing in the space was “an opportunity to inform and educate”.

The revelation reached out to the university for feedback – given the university’s history – on what it means for it to now host events honoring Indigenous histories and cultures. The university responded in an emailed statement saying they “took the trip [to Truth and Reconciliation] for several years now” and that “the university has continued to make progress in implementing the recommendations of the reports”.

When asked what the next steps are after the performance, the university conveyed The eye two articles from the Toronto Met Today, one from October 7 “for an update on the implementation of the permanent task force’s recommendations” and another from early March on “the latest update from the task force on truth and reconciliation”.

Gipp said having the opportunity to transform and write new stories in places where trauma and damage once festered is part of the beauty of the troupe’s work.

“It is more appropriate that we can go to these places, these areas that were once used as a means of destruction [and create]”, said Gipp in an interview with The eye.

Since its inception, the group has produced numerous shows domestically and internationally, including sold-out shows at the Sydney Opera House and Scotiabank Arena. The troupe has also collaborated with major artists such as The Black Eyed Peas and gained worldwide recognition with interviews both in vogue and the New York Times.

“This performance is to show that we are still there”

native liberation concluded with a sense of pride in the cultures and traditions that have been preserved despite colonial forces and interference. “When they took away our ceremonies, our religious traditions and our ways and customs, we had to adapt,” Gipp said. “And so this performance is to show that we are still here.”

As the troupe performed their final dance together, feelings of unity and tenacity filled the space of the theater. When the last dance ended, the audience erupted in applause and gave Indigenous Enterprise a standing ovation.

The Fall For Dance North festival wrapped up on October 8 and Indigenous Enterprise wrapped up their world tour of native liberation on October 14, traveling to cities like Paris and London.