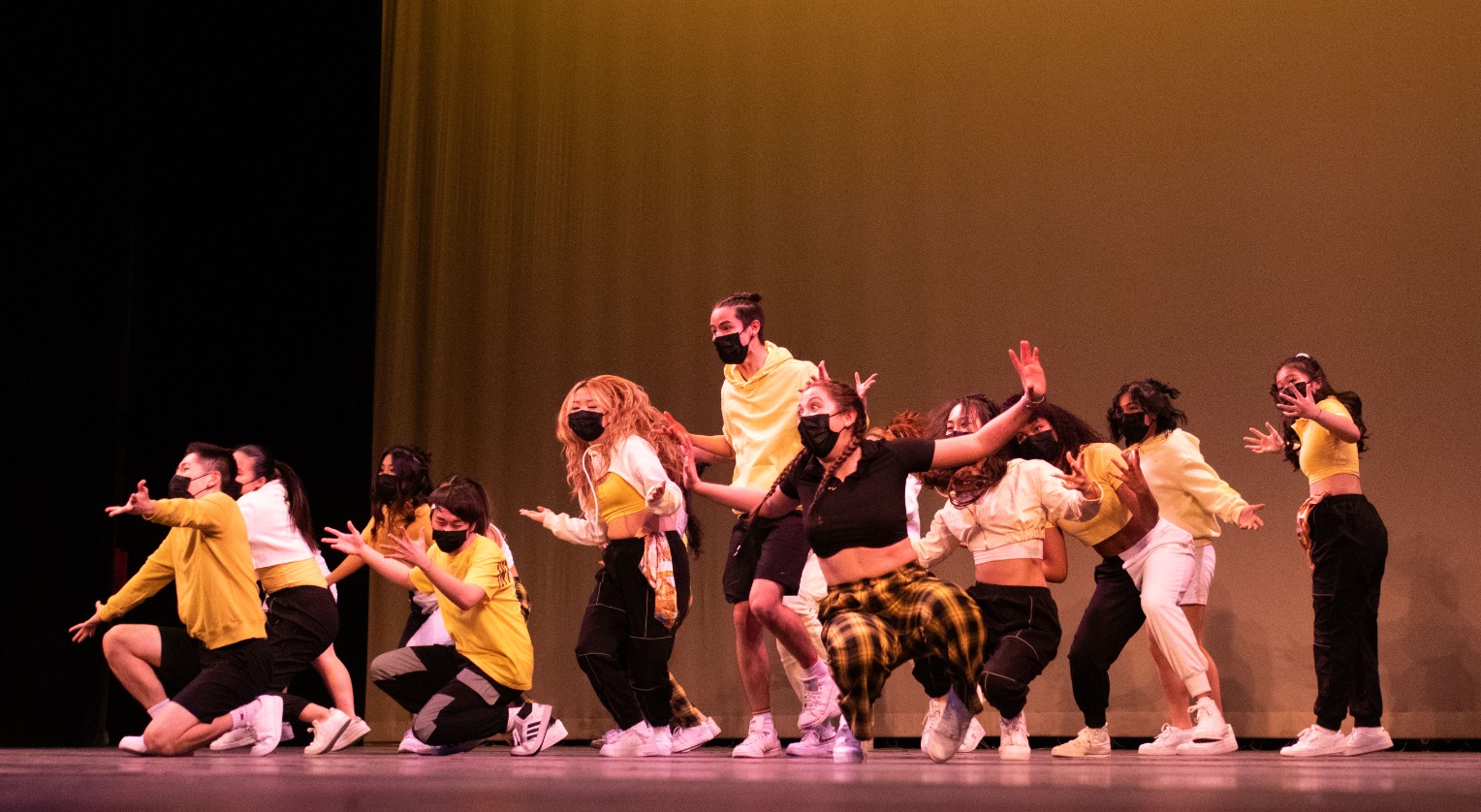 Two other hip-hop groups had originally planned to perform at the show, but had to cancel due to the snowstorm: Queens With a Mission (QWAM), an all-male dance crew from a dance studio in Malden , in Massachusetts, and UPro, a group from Boston University that mixes Asian music and American hip-hop culture.

The two emcees, Madelyn Schwartz and Madeleine Bamberger, both MCAS ’24, welcomed the crowd, noting that the show was the fifth annual “Waves” showcase and marked UPrising’s 10th anniversary.

Red lights bathed the stage in an eerie glow as UPrising dancers gathered across the width of the stage to kick off the show with a fall season routine. The audience swelled in cheers as the bass beats of Saweetie’s “ICY GRL” beat, and the dancers moved in synchronized formations across the stage.

The first set also included acting elements, as two dancers held umbrellas and performed a romantic scene in the rain. The UPrising team made quick transitions on and off stage, while moving in a fascinating and synchronized way.

Phaymus then came on stage, dancing to Romain Virgo’s “Love Doctor”. The band mastered quick transitions, as songs moved from deep bass sounds to more energetic tunes. In a dramatic moment, the lights went out on stage so that only the silhouettes of the six dancers were visible against the background.

Synergy began their set with the song “Best Friend” by Saweetie as the dancers created a pyramid formation. Their matching white sneakers shone under the stage lights, highlighting each dancer’s quick and precise footwork. The audience sat mesmerized as the dancers moved in unison with isolated pop moves in time to the music.

UPrising’s senior dancers then performed their own routine to a compilation of popular songs, including Ella Mai’s “Shot Clock.”

The lights came on in the theater for intermission and the hosts asked audience members to participate in a dance battle with an in-game El Pelón Taquería gift card. A member of Phaymus, Synergy and UPrising showed off his improvisational skills to the applause of the audience.

After the intermission, the UPrising rookies performed and crowded around each other as a dance battle unfolded between them. Next, AeroK took to the stage after halting their performances together due to the COVID-19 pandemic. The large group exploded onto the stage, weaving through different formations and alternating between powerful, precise movements and looser rhythms.

Then the entire UPrising cohort returned to play a set titled “Waves.” With coordinating black and white costumes, the dancers separated into three alternating groups.

Just when it looked like the show was about to end, Schwartz and Bamberger performed the final act, welcoming all four dance groups onstage for a collaborative set. The groups took turns taking the stage for one last dance before members of all teams reunited. The dancers formed a circle around the edge of the stage as one member of each team stepped forward in the middle to dance to Usher’s “Don’t Waste My Time.”

The music stopped and was replaced by the rhythmic stomp of the dancers on stage as they created their own beat. Cheering on each other, they all danced towards center stage, the performers creating their own energy and warmth on a snowy night.