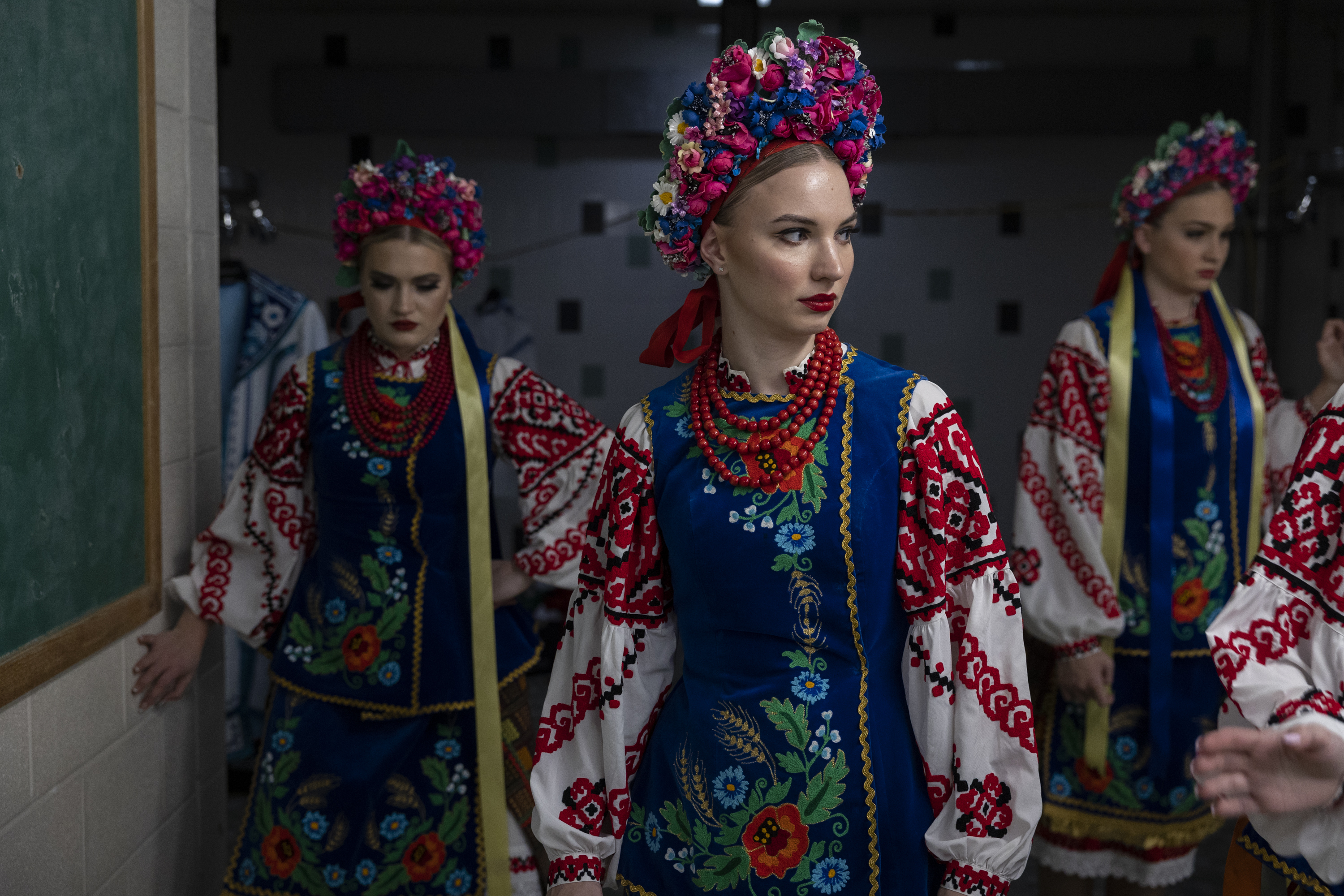 After a pandemic hiatus, the Voloshky Ukrainian Dance Ensemble is a little rusty.

A few times a week, about two dozen semi-professional dancers perform choreography in the basement of the Ukrainian Educational and Cultural Center in suburban Philadelphia.

Choreographer and director Taras Lewyckyj, 59, has been studying Ukrainian dance since he was around 4 years old.

In this one, a dancer wearing a Russian fur cap tries to come between a Ukrainian couple. It ends in kicks to the behind and the Russian rolls over.

And finally today, since the Russian invasion, Ukrainian ex-patriots and Ukrainian Americans have come together to raise funds, lobby for help, and educate Americans now focused on their homeland. NPR’s Laura Benshoff tells us about a group outside of Philadelphia spreading Ukrainian culture through dance.

BENSHOFF: After two years without a show due to the pandemic, choreographer Taras Lewyckyj puts twenty semi-professional dancers to the test in the basement of a Ukrainian cultural center.

LEWYCKYJ: Two, three, four. And an…

BENSHOFF: The greater Philadelphia area is home to the second largest Ukrainian diaspora community in the country. Lewyckyj and many of the dancers grew up doing what amounts to Ukrainian cultural immersion here, with Ukrainian language and history classes, Ukrainian scouts and, of course, Ukrainian dancing.

LEWYCKYJ: I started dancing probably when I was 4 years old because it’s a very catchy way to dance. It’s a bit like break dancing.

What I didn’t realize at the time, however, when it was happening was that it was also a way to maintain your culture.

BENSHOFF: He says Ukrainians in the United States work so hard to protect their traditions because many had family members who were killed for defending those traditions in Ukraine. His grandfather was one of them. Some members of the troupe have come more recently, so the war feels even more personal. Dancer Khristina Maria Babiychuk, a 27-year-old engineer from western Ukraine moved to the United States as a teenager. Her mother recently returned to Ukraine with supplies and to watch over her grandfather.

KHRISTINA MARIA BABIYCHUK: She had, I don’t know how many suitcases. She got – like, for three people, they had, like, 90 suitcases for, like, these bulletproof vests and helmets because it’s something that can’t be shipped.

BENSHOFF: The Ukrainian community here also coexists with a Russian community, where opinions on the war vary. Dariya Medynska says part of what the dancers hope they can do is counter the misinformation they hear by showing Ukraine in a positive light.

DARIYA MEDYNSKA: It’s nice to have that kind of breath of fresh air where we’re still letting people know it’s out there, but in a different way. So it’s refreshing to be able to bring positivity into all of this.

BENSHOFF: And, she says, it’s good for the dancers too, because they’re dealing with so much news from the war. There is also a subversive element in Ukrainian dance. Dancer Gregory Fat says many plays involve characters acting out a story that seems to be about one thing, but is actually about the oppression of neighbors like Russia.

GREGORY FAT: You know, in the USSR, still today in Russia, you know, propaganda, there is a lot of repression of what they can and cannot say. So Ukrainian dance was actually a way of telling stories in the villages.

BENSHOFF: After a few weeks of practice, the Voloshky Dance Ensemble is ready to perform at an international spring festival. Lewyckyj stands in front of the crowd of at least 200 people and performs one of these ironic plays.

BENSHOFF: In this film, a dancer wearing a Ukrainian fur hat tries to come between a Ukrainian couple. It ends in kicks to the behind and the Russian tumbles.

LEWYCKYJ: We can only hope for a happy ending like that, and you can probably understand why this dance was banned in the Soviet Union.

BENSHOFF: There are air divisions. A man spins on his head. Another does a one-handed knockdown. Lewyckyj shouts glory to Ukraine.

LEWYCKYJ: Thank you very much. Pray for Ukraine.