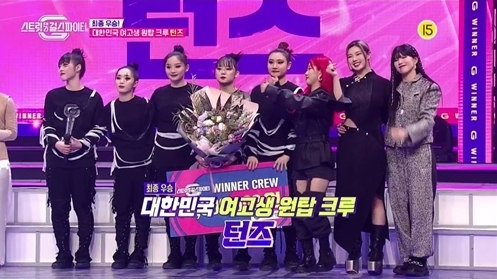 The six finalists – Newnion, Floor, Mismolly, Turns, Brand New Child and KLWC – delivered their final performances. The winner was determined by the scores of the viewers’ live vote (40%), the scores from previous missions (30%) and the average scores of the judges in the first and second rounds of the final day (30%).

For the first round of their final performances, each team performed a song that had been newly produced. Newnion and Floor performed for Itzy’s “Weapon”, while Mismolly and Turns showed off their powerful moves for Mamamoo’s Solar and Moonbyul’s “Bada Boom”. KLWC and Brand New Child performed on Jeon So-yeon’s â€œFireâ€. The finalists took turns and freely showed their creative and splendid performances at what they had prepared for the second round.

Scoring the highest on all evaluation criteria, Turns took first place, followed by Newnion and Mismolly. Brand New Child came in fourth, while KLWC and Floor were fifth and sixth respectively.

â€œWe will show a fresher and more stimulating performance afterwards,â€ said Turns frontman Jo Na-in after winning the competition. She also thanked the YGX mentoring team for their heartfelt comments, which motivated the dance team to show off various styles of performance during the show.

All six episodes of “Street Dance Girls Fighter” ended with a record 2.3% audience rating nationwide, according to Nielsen Korea on Wednesday. The show’s first episode scored 1.9% viewership, according to the data.

Meanwhile, The Korea Herald exclusively reported on Tuesday that the cable channel is planning to air a male version of the hit dance competition show, featuring some of Korea’s most talented male dancers this summer.

Following the report, the cable channel unveiled a short teaser for the upcoming “Street Man Fighter” towards the end of the last episode of “Street Dance Girls Fighter”.