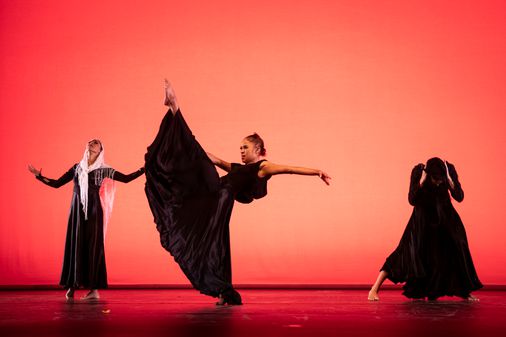 The vital power of the Cleo Parker Robinson Dance Ensemble

Robinson’s “Mary Don’t You Weep”, an excerpt from his “Spiritual Suite”, was inspired by the life and death of Dr. Martin Luther King Jr. and Robinson’s brother. Nikki Giovanni’s spare poem “The Women Gather” is delivered in voiceover, before Eric Gale’s powerful, bluesy/funky rendition of the titular African-American spirit dance rings out, its infectious swaying and strutting. In short, a preacher, played by Davry Ratcliffe, makes his way onto the stage, with hasty steps, reaching out, imploring, then contracting into a shell, hands drawn back to his center, in private prayer. The main event, however, is the choreography of the three grieving women who alternately cross the stage, supporting each other, arms clasped behind each other’s backs, or bound by outstretched hands, or seated on chairs, feet shaking all the time. . The solos are filled with percussive contractions and floats suspended on one leg, the other leg piercing the air above the dancer’s head, his torso leaning precipitously to the side or arching deeply back. The opening night trio of Chloe-Grant Abel, Samiyah Lynnice and Topaz von Wood were extraordinary, fierce and rigorous.

2017’s “Crossing the Rubicon: Passing the Point of No Return” was the great McKayle’s last piece, and the company honors his legacy — and the dance’s dark subject matter — by dancing it with unwavering focus. Like McKayle’s dance, Anoushka Shankar’s sitar and percussion-fuelled score was inspired by the traumatic experiences of refugees driven out by war. Kenneth Keith’s evocative lighting design (adapted by Trey “Trezie” Grimes) bathes the scene in dark shadows or strikingly captures a long diagonal of travelers weaving their way across the stage with a repetitive sequence and bewitchingly muffled, thrusting one leg forward, their hips following a moment later, making semi-circles, over and over again. Yoojung Hahm and Tyveze Littlejohn are scorching in their fascinating long duet that begins in a ritualistic manner, the two rushing side by side or, mirroring, climbing legs in expanded staccato. Meanwhile, the precision of the ensemble throughout the dance – including later in the long running, breathing and jumping sections – is striking and essential to maintaining the frame of the performance. While the performers, after all, are meant to indicate the exhaustion of being constantly on the run, their physical prowess as trained dancers, combined with their artistic integrity, underscore McKayle’s thesis here: how humanity, even in the midst of struggle and horror, is ultimately a beautiful resistance to the ugliness of war.

Garfield Lemonius’ 2017 “Catharsis” is an abstract study in the kind of less tense, yet still real, everyday concerns that we humans seem unable to shake. This piece also features a central pas de deux which highlights, through the alternating sharing of the duo’s physical weight, the power of emotional support. Hahm, here with Corey Boatner, are largely magnificent in their virtuoso choreography, creating one indelible image after another, but at times Lemonius’ choreography strays from organically constructed phrases and relies on an ambitiously acrobatic partnership that seems seeing and moving in this ostensibly reflective dance. . The often lively ensemble work is also tense from time to time with overloaded phrases, which the dancers valiantly strive to execute.

How delightfully fitting that this program from this company, founded by a woman, ends with a piece choreographed by a woman (former company member Nejla Y. Yatkin), for seven women. Even better than the dance, 1998’s “Daughters of Salomé” overturns the usually misogynistic portrayal of Salomé as the killer of heartless men. Although the second part of the dance relies too much (for me) on the women walking around with their hands on their hips staring at the audience, the first section is a finely constructed spectacle featuring a rainbow of women strong. In addition to Abel, Lynnice and von Wood, the equally formidable Caeli Blake, Jasmine Francisco, Gabriela Maduro and Lauren Slaughter step in and out of the group to perform striking solos, inspired by Graham or Horton. It’s a testament to Yatkin’s choreographic chops that the chorus-group staging is beautiful enough to command attention while keeping the soloist center stage. Dance is both a celebration of individuality and the vital power of a community.

Janine Parker can be contacted at [email protected].