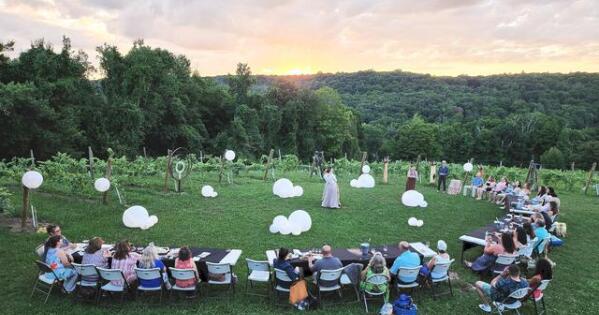 Three dancers drifted and raced among illuminated globes displaying emotions that ranged from serenity, angst and intensity to collegiality, trauma and restoration as they danced to ancient Japanese art du Kintsugi – repair broken pottery while highlighting the broken areas.

It was the show that welcomed several dozen attendees during Ballaro Dance’s emotional return to Sandy Hook on August 10.

After a well-received dance performance among the flowers at Appleberry Farm in September 2020, dance company founder Marisa f. Ballaro brought his latest work-in-progress, “Embedded Memories,” back to Appleberry Farm last August. She followed those performances with this month’s event on the west-facing hill at Aquila’s Nest Vineyard for a sunset session of her interpretive dance.

As she explained, “Embedded Memories” is a light installation rooted in respect for personal stories through the prism of scars and their images that live permanently inside the bodies of those affected. She believes that people can personally benefit and even experience some healing and resilience from participating in this very unique style of shared storytelling and movement.

“By investigating the memories and stories these footprints hold, we can learn from each other and promote community healing,” she said.

Ballaro, who professionally accentuates his name using a lowercase f, said The Newtown Bee the most recent performance incorporated her final tweaks to a project she first developed for a university master’s thesis to complete her master’s degree in dance from Montclair State University in June 2022. Although he has grown and changed since its inception, including the transformation from using four, down to three dancers, the combination of movement, sound effects, storytelling and props was nonetheless spellbinding.

For the Vineyard Recital, each dancer – Nicole Daniell, Hannah Dillenbeck and Hannah Kearney – had some degree of accent lighting as components of their costume, depicting golden accents to illuminate the stories they told in silent movements and facial contortions as Ballaro read from her script.

With each passing minute after the sun set below the western hills, dozens of illuminated silk lanterns and luminous pieces on the dancers’ costumes seemed to grow brighter, reflecting the deeper meaning of the dance. As Ballaro’s narration continued, punctuated by musical stings and other sound effects, audience members sat and watched, silently delighted.

Having performed in multiple locations since August 2021, including Sandy Hook, New York, Brockport and Saratoga Springs, NY, Ballaro said the reach and intimacy of ‘Embedded Memories’ continues to grow with each performance and the contributions of Community Imprints : audience staff memories and stories left in the form of photos or writings during the post-performance engagement with the artists.

“This project began development in February 2021 and its continued research and creation was towards my thesis,” she said. “Now it’s an ongoing living project for Ballaro Dance and we hope to continue to spin it alongside Community Imprints’ tandem project.”

Inspired by Kintsugi, Ballaro said deeper connections to Japanese philosophy and the healing process were explored through additional research and experimentation in Reiki and Butoh. Rooted in a collaboration with New York-based artist Allison Patrick, “Embedded Memories” has grown and expanded through contributions from the Community Imprints collection.

Learn more about the dance troupe and their upcoming performances by visiting ballarodance.com.

Editor John Voket can be reached at [email protected].

As the glow of August 10 moved towards darkness, the illuminated silk lanterns and costume accents used for “Embedded Memories” became more apparent.

Under the eyes of Nicole Daniell, member of the Ballaro Dance troupe, Hannah Dillenbeck and Hannah Kearney interact with sensitivity.