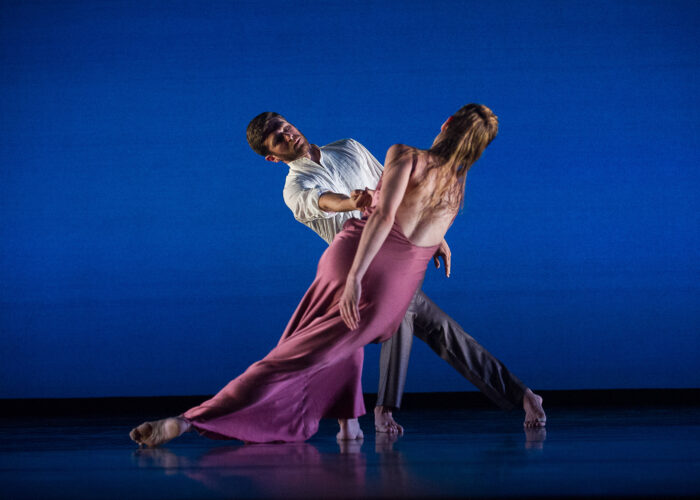 It was not an enthusiastic reception when Brooklyn’s Mark Morris Dance Group returned to Cal Performances on Friday, December 17, resuming a more than 30-year relationship with the company’s home on the West Coast after a pandemic two-hour absence. year. UC Berkeley’s Zellerbach Hall looked half full and half empty. Cal Performances artistic director Jeremy Geffen spoke with a note of fatigue as he told audiences that art can provide “comfort through inconstancy.”

Then the curtain rose on Morris’s delightfully relatable dancers, and I found myself thinking not of comfort or inconstancy, but of transcendence.

Friday night’s program, which kicked off a nationwide tour (the group canceled performances scheduled for Saturday and Sunday December 18 and 19, after coronavirus infections were detected within the troupe during routine testing on Saturday), listed the most extraordinary dance of the night, “V”, as a premiere on Oct. 16, 2001, in London, but longtime fans of the Bay Area band will vividly remember going forward. -first he received here 12 days earlier that year. Back then, “V” sounded like an instant classic, and it sounded like the affirmation of the human spirit we all needed so soon after the Towers fell on September 11.

The dancers crawling into the rhythm of the funeral song-like second movement of Robert Schumann’s Piano Quintet in E-flat major seemed at the time (at least to this viewer) to suggest war. The finale of the fourth movement of a boiling embrace between two squadrons of dancers, half dressed in flowing blue tunics and the other half in pale green slacks, seemed to hint at the possibility of triumphing over vicious circles of conflict with a surge of goodwill. (Of course, we all know how that possibility withered in the political maneuvers that led the United States to invade Iraq.)

Amid lingering concerns over COVID-19, “V” invites a whole different set of associations: death from disease, societal divisions and the need for human contact. Yet just as â€œVâ€ transcended the context of its premiere, it will transcend this moment and make room for new associations in the decades to come. Such is the wonder of formalism, or of dance which is “about” nothing other than its own internal structure and the response of that structure to music.

This is why Mark Morris’s choreography was a national sensation in the early 1980s, an international sensation in the 1990s, and an institution by the time. The human mind longs for meaning and perceives it as a model – in the assurance of an invisible order behind reality. When the motive is linked to the suggestion of human gesture as steadfastly as in “V”, the result seems larger than our material world. And that is indeed a comfort.

The night started with Morris’ new â€œWater,â€ which the group first performed outdoors and in sneakers alongside New York’s East River in October. Transferred to the stage, he is now dancing barefoot, but always in simple black pants and shirt. Two rows of 13 dancers circled the stage, some carried upside down in a slightly comic fashion while the others reached out to touch each other.

Perhaps the greatest pleasure of this 10-minute piece is hearing the reduction to five instruments of Handel’s famous score (created to be performed on the Thames in London at the request of King George I), especially the glittering piano by Colin Fowler. A final section of jogging with the dancers darting in a syncopated jump with wide arms particularly delighted.

2013’s â€œJenn and Spencer,â€ set to Henry Cowell’s fascinating â€œSuite for Violin and Pianoâ€, is fueled by a different kind of mastery. In this tumultuous duo, ostensibly artificial movements, like two dancers pressed into symmetrical positions, foot to foot, are in a way danced with a deeply human motivation. Brandon Randolph has to be the finest dancer on the current roster, and he has evolved with a magical blend of clarity and passion. Karlie Budge gave as well as she got in her floor-length satin gown, levitating Randolph to her feet as much as he lifted her.

â€œDancing Honeymoon,â€ from 1998, took out all of Busby Berkeley’s stops to deliver pure madness at the center of the program, with the dancers standing on folding chairs and shaking them. An added treat was the surprise of Morris himself, now 65 with a white beard, singing the tunes of the 30s and 40s with his old friend Mary Sherhart from Washington state. Morris has a good baritone and the interaction was lively.

It’s hard, over the years, not to miss some larger-than-life retired Morris dancers such as Julie Worden and Lauren Grant. Maile Okumara danced with uncommon passion on Friday in “V”, but some of the new dancers have matured to do so before they reach that intensity of being on stage.

Yet thank goodness they’re back on stage and a dance job that, yes, transcends.