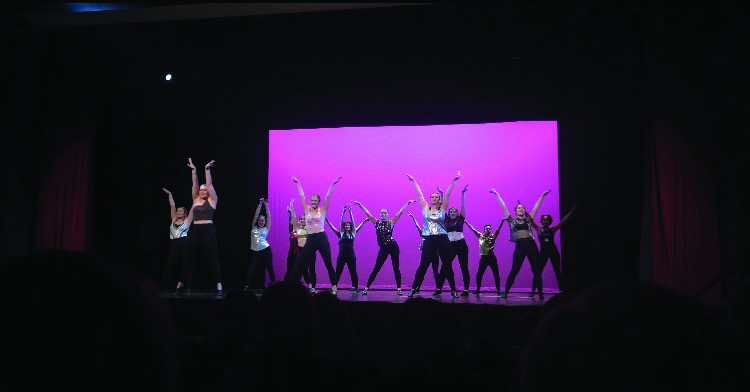 Raising the “bar” with Rider Dance Ensemble – The Rider News

Parents and peers made their way to the Bart Luedeke Center theater and were greeted with a QR code for the event program and a slideshow of behind-the-scenes shenanigans projected onto the elevated screen.

Immediately, the feeling of love and camaraderie was evident during the Rider Dance Ensemble’s (RDE) fall presentation “Raising the Barre.” The showcase featured more than 90 dancers in a variety of dance styles, according to RDE President Julia Tubbs.

“This show had a lot of different dance styles. In previous years, it was mostly contemporary dances with a few jazz dances and then a tap dance,” Tubbs said. “This year we had an equal number of jazz and contemporary as well as three tap and within those styles there were variations within those styles. In the jazz dances there was upbeat, sexy and traditional musical theater and in the contemporary dances the different styles of songs were reflected in the movements of the dance. Even the three faucets each had their own style.

Each of the pieces was choreographed by the students involved in RDE, and the emotions expressed ranged from fun and energetic to heartfelt and solemn.

The rehearsal process for the showcase was quick and varied from dancer to dancer, explained senior dance major Rose Conroy-Voza.

“Once the choreographers have chosen their dancers, rehearsals usually begin within two weeks,” she said. “Rehearsals are usually once a week for about an hour for each dance you’re cast in.”

While the rehearsals are meant to teach choreography in the living rooms of the residencies they find, Conroy-Voza thinks they’re also important for forming an emotional bond between the dancers.

“I’ve learned now, as a senior and in hindsight, that this time is one of the strongest bonding experiences,” Conroy-Voza explained. “Dance is already an activity where people move, breathe, create and express themselves together… But now we have a group of tired students all crammed into a tiny living room. It does all of those things, plus a ton of jokes, sleepy laughs, and some of the funniest hours of the week.

As the dancers rehearsed for the upcoming showcase, they finally stumbled across tech week, which is Tubbs’ favorite part of the process.

As expected, a show with such massive volume ran into problems before it was played in front of an audience.

For Conroy-Voza, her biggest hurdle was rehearsing in small spaces such as residence halls, but for Tubbs it was simply coordinating with everyone involved in the showcase.

“We’re one of the largest student organizations on campus, so probably the hardest part was making sure everyone knew when to be where, especially for show week. Many of our students are also involved in d ‘other activities on campus to coordinate when people were going to be absent or running late and let everyone know that their absence was going to impact the show,’ Tubbs said.

Despite the small rehearsal spaces and the coordination of a large group, RDE managed to stun their audience with their dancing.

They dazzled audiences with great group numbers to songs by Lady Gaga and Beyoncé, and held their attention with slow-tempo, heartfelt tracks. The mix of high-energy, high-energy performances with mellow ones was evenly paced, ensuring audience members were never put to sleep by slow bit after slow or jittery bit after several catchy songs in a row.

Overall, “Raising the Barre” was a great showcase of the students’ talent for dance, and the audience left the theater impressed with the creative movement displayed on stage.

A contemporary dance troupe lights up the Auditorium Bovard