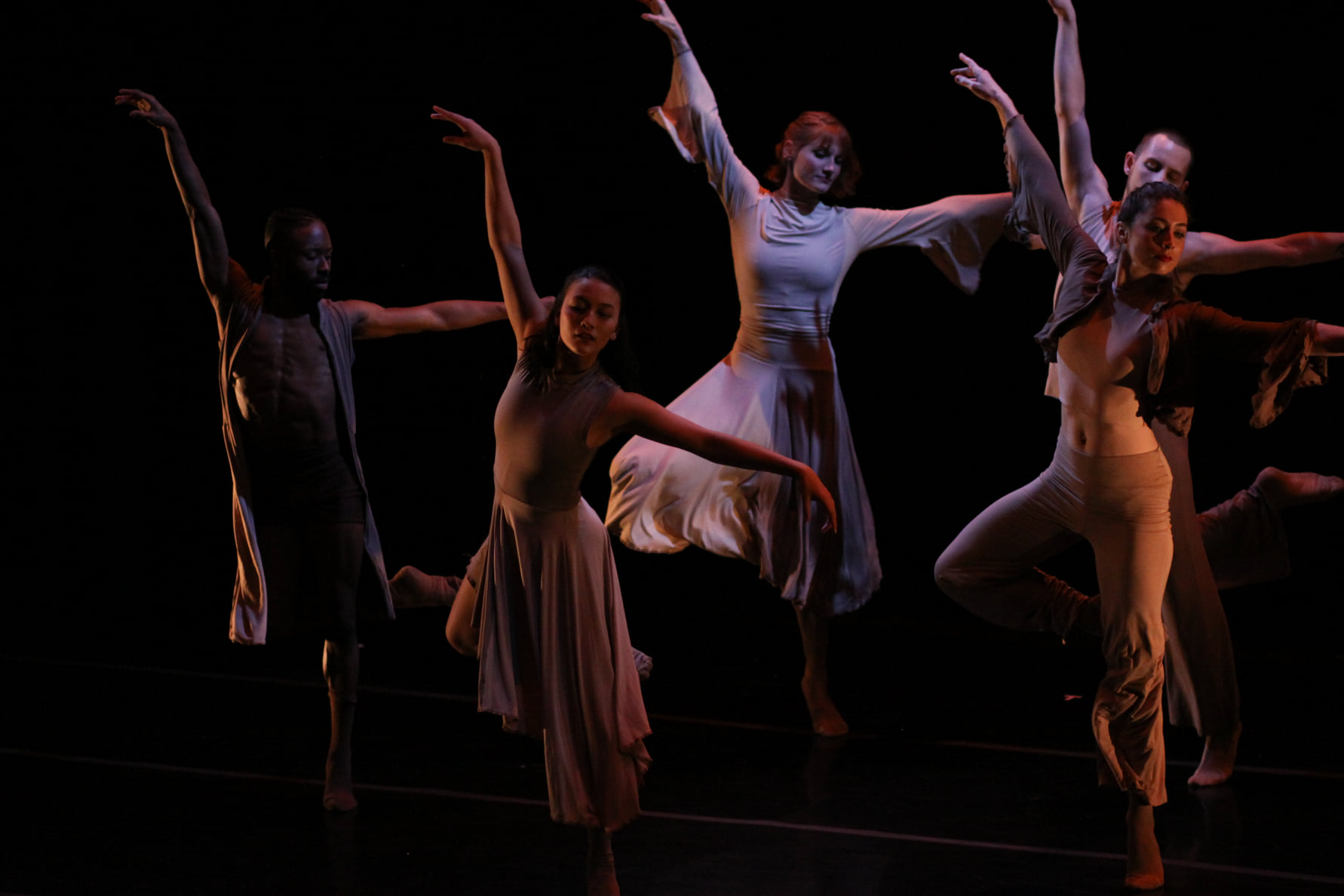 “Skin”, presented by the Owen/Cox Dance Group, was a thoughtful and intimate collaboration with singer/songwriter Helen Gillet. Gillet is a Belgian-American cellist-singer based in New Orleans. This is their second collaboration, after “Memory Palace” in 2014.

After all, what is more intimate than the skin? It identifies us; binds the mother to the child in the first minutes after birth; informs us of temperature changes and wind changes; serves as the first line of defense against disease and infection.

Barefoot, Gillet performed on stage on one side of Union Station’s City Stage, singing, playing cello and controlling her loop station. She built each track in layers, with drones and strums, plucking and drumming her cello to create a vast sonic palette, singing in both French and English. The music was by turns mournful, bluesy, jubilant and unfettered.

Jennifer Owen, co-founder and artistic director of Owen/Cox Dance Group, choreographed eleven songs, with input from the dancers, who added their own stylistic flair and impulses. The hour-long performance was an athletic and evocative display: no intermission, a few breaks, one song following the next, and although the dancers had strategic time offstage, the performance had a comprehensive approach, from start to finish.

Rather than forming an ensemble based on a uniformity of body shape, Owen brings together dancers of different sizes, styles, and body types, then choreographs based on those strengths. This strategy of celebrating accolades, rather than conformity, adds sympathetic nuance to every gesture and phrase. Here, in particular, the interplay of different skin tones was emphasized in lighting and costume.

The dancers often made eye contact with Gillet, this direct link between the artists of the music and the artists of the movement is not always highlighted in the performances. His music has a pulsating and nostalgic element, the instrumental layers like water under the sand, ever present but subtly changing the nature of the piece.

The choreography played against tradition, associating women, men, each dancer, at a given moment of the show, carried by the others. This elevator motif was an interesting guideline of the work, sometimes dramatic, sometimes more like an embrace. But it demonstrated a closeness and a vulnerability, to literally support each other as they walked the room together.

Small elements also came back, a drawl, a strut, a stomp. McBride Guerra was featured in “Angelene”, with her phrases and gestures returning in later sections. Each dancer had solo moments, with organic phrases of wide, swirling movements. Warner in particular seemed to vibrate, resonate with movement, explode and contract in just a few steps, featured in “Slow Drag Pavageau”.

At one point, the ensemble came together in the center, each reaching out a hand as if to pluck something – a speck of dust or a distant memory – from the air, the repeated gesture of close attention and despair.

The music featured both covers and original works, including the world premiere of “Shepherd’s Lung”, which featured beautiful solo works by McReynolds. This work was Gillet’s response to the ongoing pandemic.

His music runs through emotions, often gloomy and introspective, many of which come from his album “Helkiase”. There were of course exceptions, with the inclusion of Jules Beaucarne’s ‘La Petite Gayole’, a Walloon anthem, was a playful start, moving with the energy of folk dance, soft and smiling. She also included “I Live Off You,” by female-fronted punk band X-Ray Spex, with the dancers clambering over each other. In “Tonnerre” there was also an additional element of a scratchy recording of the spoken word, the frantic cello above.

Gillet loves improvisation, sometimes labeled a jazz artist, sometimes an electronic music artist. Although these works have been solidified for the sake of choreography, this quality of improvisation has been retained, each piece imbued with this feeling of spontaneity. Even when the movements were synchronized, the feeling was as if the dancers were responding emotionally, instead of precisely counting the beats.

Powerful side lighting, close and shadow moments, and nuanced transitions were effectively crafted by Kyle Greene and Shelby Arndt. Chad Meise was the sound engineer.

Jennifer Tierney (a dancer who performed with Owen/Cox Dance Group) designed the costumes, with each dancer dressed in a form-fitting fabric that almost matched her skin tone. While often a range of sepia tones gives a production a dystopian feel, in this case not so much, with added film movement and edge swirl. Warner, in particular, used the tail of his long, open vest for impressive dramatic effect. They shed those layers for the final work, retaining flesh-colored shorts and tops, ending the performance with tender closeness.

Owen/Cox Dance Group has a commitment to performing with live music and this collaboration has beautifully demonstrated the value of that mission.

Inside Out Dance Ensemble returns to the MCCC stage