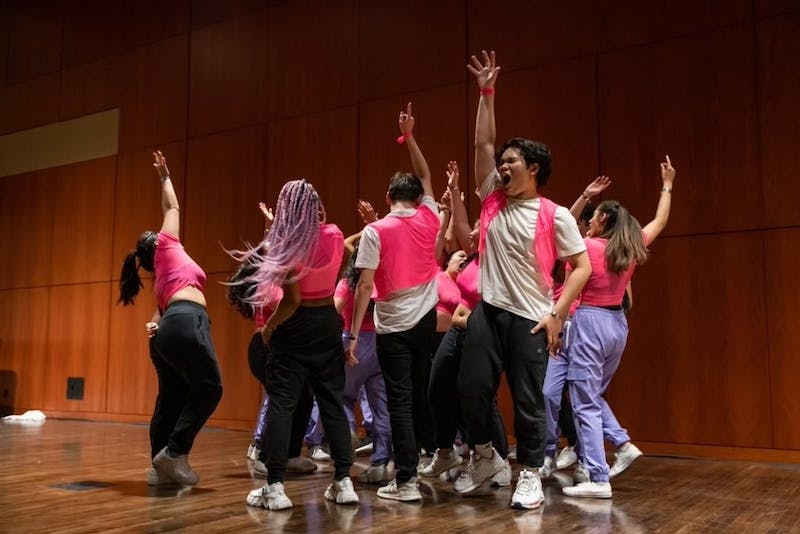 Julianna Quiambao, social and behavioral science major and artistic director of FLASH DT, said the team is open to students with and without dance experience.

“FLASH DT is a community,” Quiambao said. “It’s a way to stimulate the creativity of our members. But above all, we have this aspect of family and this hospitality.

“The one thing we want people to get out of FLASH DT is to have a community where they feel safe and comfortable being themselves,” Quiambao said.

Quiambao said there were nearly 40 students on the team this year.

“A lot of freshmen this year are so nice and they’re so supportive and it seems like everyone is having fun,” Quiambao said. “That’s mainly the reason why I joined DT.”

Quiambao said that as an art director, she loves being able to share her work with an audience.

“I always loved dancing when I was a kid,” Quiambao said. “Just the idea of ​​choreographing something and then having it on a big performance, like for parents’ weekend, it’s really cool to think that you’re creating something that other people who don’t know dancing or just want to see the show, they see your work there.

Julie Myhal, art design major and director of FLASH DT, said the organization provided her with a creative outlet.

“I’ve never danced in a studio or anything, so it really allowed me to explore that side of myself,” Myhal said. “It gave me a sense of community and I really enjoyed that we met often, which forces you to get to know people.”

Myhal said joining the team gave her skills she can use after college.

Enjoy what you read? Get content from The Setonian delivered to your inbox

“This is really my first time in a leadership position,” Myhal said. “Being a leader, which I didn’t know I had in me, was learning to come out of my shell and talk to people more. And I feel like that can definitely translate once I leave college and move on in life.

“Everyone made me feel like a member of the family, even though I didn’t dance at all, so it was really fun. It was a good experience to get started because I’m very introverted,” said Arrizon: “So that definitely brought me out of my shell a lot more.”

Arrizon said FLASH DT demonstrates a good balance between maintaining a professional attitude and having fun.

“Even though it’s hard to maintain that balance at times, we manage to make it work and it’s always fun,” Arrizon said. “We always make the performance memorable. So that’s all that matters to us. »

“One of our newest members, Lakeisha,” Quiambao said. “She even said to me, ‘I love being in DT. Everyone is so positive and supportive. I love the energy.’”

Peyton Hruska can be contacted at [email protected]