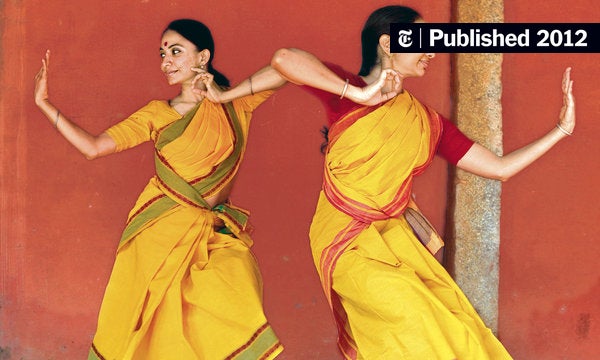 At first one wonders why the dancers of Nrityagram call the masculine Chitrasena style. The two Sri Lankan dancers involved in this project are remarkably beautiful, slender young women with long limbs. Soon, however, the difference between their idiom and that of the Nrityagram becomes evident. Chitrasena women cover much more space than Odissi dancers, both in the easy vertical lifting of their limbs and in their horizontal movements. They also move their arms, wrists, and torso in different ways; and they show off some of the sensual, melting horizontal curves that are at the heart of Odissi. They also show facial enthusiasm with broad smiles, while Nrityagram dancers, like most Indian classical stylists, maintain facial calm in pure dance passages (while using shifting facial expressions in formally expressive sequences) .

And where the Odissi dancers wear a chain of bells wrapped three times around the ankle, the Chitrasena dancers wear bronze anklets with internal bells, attached to both the ankle and the second toe. (It was fascinating later to see such an anklet depicted in a century-old sculpture in the Madurai temple in the southeast Indian state of Tamil Nadu.) After attending a rehearsal or two, I had certainly could identify the ways in which the Nrityagram and The Dancers of Chitrasena differ. I could also see where they came closer, like a meeting of finely tuned spirits. What I couldn’t see, however, was where the dancers took on something specific in each other’s style. So I asked.

The answer was rhythm. Here, it is true, the Western ear passes into the mystery; Traditional Indian and Sri Lankan music usually uses meters of a complexity that puzzles many skilled Western musicians and baffles most Western dance enthusiasts.

One evening at Nrityagram I watched the two Sri Lankan dancers, Thaji Dias (a granddaughter of Chitrasena) and Mithilani Munasingha, working for hours with their choreographer, Heshma Wigaraja, and with three of the musicians from Nrityagram to hone their skills rhythmic of these syllabic dances (“Takateeta deena, Takateeta deena, Takateeta deen” is the way a phrase sounds) in the Odissi counter. The singer and the violinist were as involved in the syllables as the drummer and the dancers.

Likewise, at other times, the Odissi dancers soak up the Sri Lankan rhythm. Watching them on another rehearsal, I noticed that even a seemingly slow-motion phrase is set to a fast drum shift. It seemed that in the gradual movement there was a rapid sequence of minor pulses, each one to be integrated with intense precision into the dance.

A Western observer begins by finding everything in “other” Indian dance; when I first watched it in London in 1980, I thought I had no vocabulary, no frame of reference, for what I was seeing. What becomes captivating, however, in Indian dance – notably the Odissi form of the Nrityagram – is that it contains multiple othernesses. These Indian dances are full of dualisms: masculine and feminine elements (even within the “feminine” Odissi), sculptural qualities and sinuous transitions, abstract form and mimic gesture, movement and rest. The contrasts within the idiom allow for endless expressiveness.