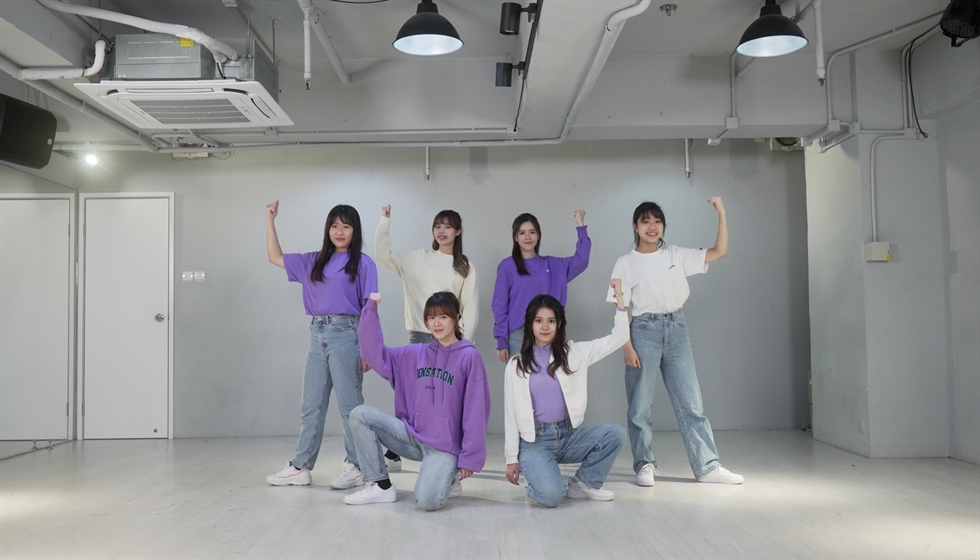 HONG KONG ― You might have seen them if you live in Hong Kong: six young women performing in some of the city’s busiest and most scenic spots, their dance moves are fluid and elegant.

The women make up Chocomint HK, a K-pop cover dance crew whose members perform “K-pop in public,” a popular trend on social media platforms such as YouTube.

Considering the fact that many K-pop cover dance videos made in Hong Kong only attract, on average, hundreds to thousands of views, these numbers are phenomenal.

The videos caught the attention of BLACKPINK fans around the world and boosted their subscriber count to 7,700 from around 4,000 in the past month.

“The number of compliments and views of our videos flattered us,” adds Isis Lai Yin-yu. “We didn’t expect viewers around the world to be so supportive and encouraging. The likes given to our videos and Instagram are definitely the reason we keep filming dance covers.”

A comment in Cantonese reads, “I’m happy to see the night view in the background, and the way you matched your clothes with the background of the cover deserves praise.”

Another comment, in English, praised the dancers’ resemblance to the K-pop girl group, from their hair and clothes to their facial expressions, “And of course the work of the cameraman, filming and editing the whole thing, is also very well, the background, the places, the landscape behind the girls too.”

Chocomint HK is surfing on the growing popularity of K-pop in Hong Kong. A YouTube search turns up more than 10 cover dance crews in the city, such as Stunning Dance HK with 61,400 subscribers and Saga Dance Crew with 11,700 subscribers.

These teams regularly upload skillfully choreographed K-pop dances―new and old―often filming them in one take. The groups film in different parts of the city, wearing outfits similar to those worn in the original videos by the singers.

Chocomint HK is made up of six friends ― Lai, Pearl Chan, Charlotte Chan Lok-yee, Vicky Wong Ming-yan, Jammie Tsang Hoi-ling and Cherry Lo Ching-ting. Most of them went to college together and share an “incredible” love for K-pop.

They had already been dancing together for years before they started uploading videos. After graduating and feeling a lack in the number of offline places they could show off their talent earlier in the coronavirus pandemic, they created a YouTube channel to upload their cover dance videos in January 2021.

It’s not just the moves they focus on either – the band put a lot of energy into getting the costumes perfect, practicing lip-syncing to the lyrics, and matching their facial expressions to the original videos.

It takes almost a month to make a video. One to two weeks are used to discuss and buy costumes and it takes one to two weeks to practice and film. The video is released a few days after the shooting.

“We make our own costumes and exchange feedback on dance moves and costumes,” added Charlotte Chan.

Their efforts paid off. The group’s cover of KARD’s track “Ring The Alarm” came second in a dance cover contest, and they were invited to perform at several K-pop events.

For the team, being on a dance crew isn’t just about mimicking K-pop numbers; it’s about friendship.

“We do cover dances as a hobby because we all love K-pop and dancing so much,” Lai said, but they also do them to improve and strengthen their bond with each other. “We all experience the ups and downs with our friends, which is unforgettable and precious.”

The team doesn’t have an end goal – they just do what they’re good at and enjoy while hoping to find more opportunities to perform and see their favorite K-pop acts through their activities.

“For now, we just want to bring good covers to others and gain more attention,” said Charlotte Chan, adding that they would like to be noticed by the singers they imitate. “For me, my end goal should be to dance with my favorite idol.”

Award-Winning Dance Troupe Spreads the Challenges of Down Syndrome