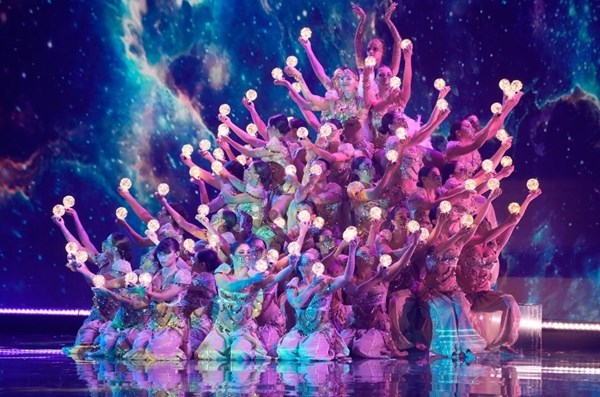 The Lebanese dance group dazzled the world and the AGT jury, receiving a standing ovation from all the judges and the penultimate golden buzzer.

Confetti flew as members of the dance group jumped in shock, relief and joy after the golden buzzer was hit.

Mayyas’ final performance was paired with that of Sellars, who performed an 80-second dance that sent waves of accolades through the crowd.

Vergara took to Twitter, expressing: “I AM SO PROUD, @mayyasofficial YOU DESERVE IT!!!!,” also posting an image with an excited Vergara holding one arm in the air as the dancers burst into tears of joy around her.

The Lebanese flag was waved among the audience as they applauded the group, receiving a standing ovation from all the judges.

“This is what a million dollars looks like,” Klum said. “You brought your game every time you came and tonight was a plus.”

Ultra-critical talent Cowell, for his part, remarked that the show was “astonishing.”

“Something happened with you guys where I’m starting to feel a buzz beyond the show,” he added. “It landed. It’s global. It is enormous. I don’t think you can do better than that.

The group’s choreographer, Nadim Cherfan, in an interview with Saudi Arabia-based media Arab Newspoints out that “The Lebanese people around the world have shown us tremendous support.”

The golden buzzer, with all the revolutionary implications that come with it, is not enough for Cherfan: “The golden buzzer, the standing ovation, the nice comments from the judges and winning the title itself are challenges, because they mean stress and responsibility – in these times (all I think is c ‘is)” And then? How can I do better? »

The Lebanese people are suffering one of the worst economic and political crises in modern times due to US corruption and sanctions and interference in internal affairs, in addition to an explosion in August 2020 that devastated the capital, its painful effects suffered to this day. The dance team’s victory, for many Lebanese, was a breath of fresh air, cementing a sense of pride and joy among a struggling population.