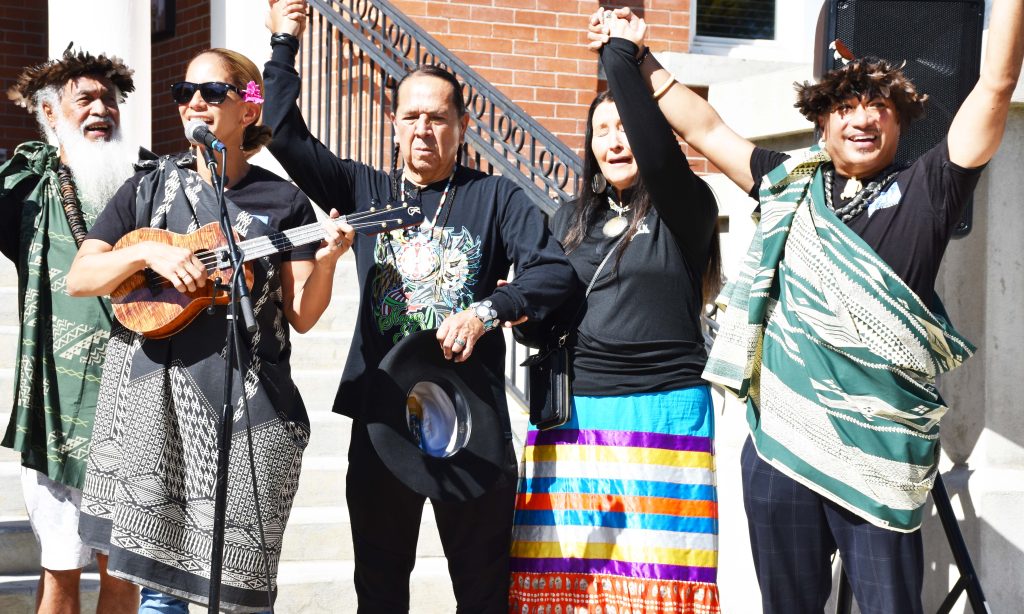 LOGAN — Members of Hawaii’s talented Tau Dance Theater (TDT) took time out of their residency here to interact with the Shoshone Nation’s Northwestern Band on Wednesday.

The Tau Dancers will perform their signature blend of hula, modern dance and ballet at the Ellen Eccles Theater at 7:30 p.m. Friday to kick off CacheARTS’ national touring season.

Their residency will also include a workshop with local dance companies and a matinee performance for approximately 1,000 local students and educators.

But TDT founder Peter Rockford Espiritu said the dancers’ interaction with local Shoshone people is particularly meaningful, given that its performers are themselves survivors of the US occupation of Hawaii.

Much of the land acknowledgment ceremony was conducted in the native language of the Hawaiians.

“This ceremony and ritual is an act of respect for someone’s land. It is an ancient practice and one that should not be forgotten,” Espiritu said.

Espiritu was joined in acknowledging the ancient Shoshone claim to Cache Valley by master storyteller Kealoha Kelekolio, the former longtime cultural educator at the Bishop Museum in Hawaii.

Morningsong, a member of the Northern Cheyenne tribe, is a gifted singer, songwriter and Grammy winner. She was selected as Artist of the Year at the 2019 Native American Music Awards.

A member of the Zuni/Omaha tribe, Fontenelle was an original member of the American Indian Dance Theater. He also won first place in the men’s traditional dance competition at the “Rassemblement des nations” in 2019 and 2022.

The highlight of the land acknowledgment ceremony was a song by famous Native Hawaiian musician P maika’i. Educator and event producer P maika’i is the granddaughter of Hawaiian music legend Aunty Genoa Keawe.

TDT members will also visit the site of the October 1 Bear River Massacre, where hundreds of Shoshone were killed by U.S. cavalry in 1863.

This visit will be followed by a dinner to which local Native Americans and Pacific Islanders are invited. Locals can RSVP by contacting the Ellen Eccles Theater.

CacheARTS is an independent group that facilitates the highest and best use of the Eccles Public Theater, Thatcher-Young Mansion and Bullen Center.

Tickets for National Touring Season events are available at www.cacheARTS.org.