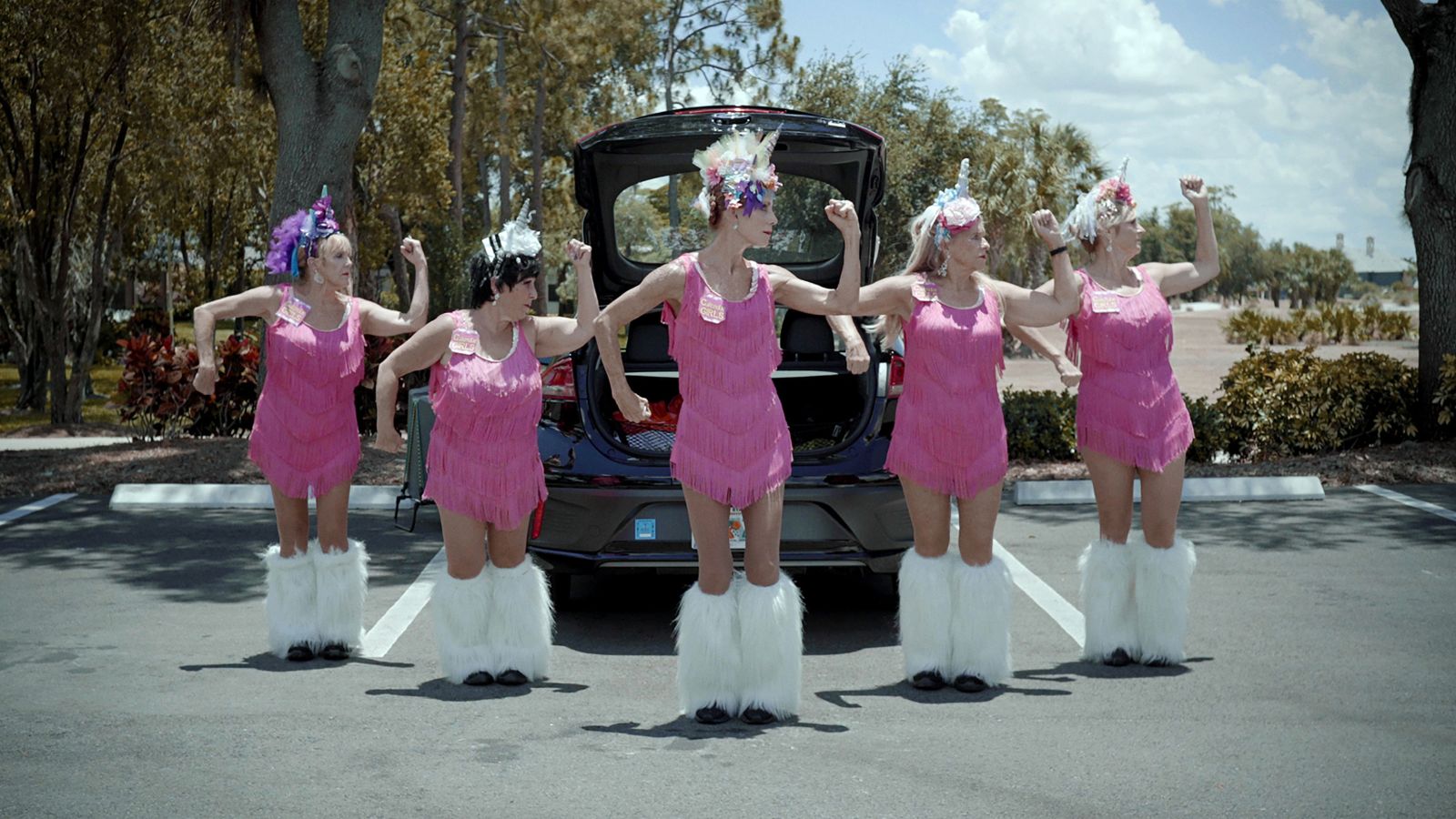 Let’s be clear: no one becomes a member of the Calendar Girls, Southwest Florida’s first geriatric dance troupe. As Steam Engine founder and leader Katherine points out, the charity collective of women over 60 takes itself seriously, rehearsing half the year to play the other half. And between homemade unicorn headpieces, sequined leotards and electric blue eye makeup, some husbands just can’t stand their wives having fun.

It’s the delicate balance that directors Maria Loohufvud and Love Martinsen strike in their skillful and dedicated documentary Girls Calendar. The Swedish duo celebrate their subjects with exuberant visuals one might expect from a film about a group of old ladies dancing their socks off, while gaining intimate enough access to witness the frustrations of aging. Although only in-depth with certain members of the group, the documentary manages to treat each Calendar Girl with the dignity of an artist dedicated to her craft. This heartfelt yet playful tone is aided in large part by the use of choreographed interpretive dance sequences that the directors worked with the cast to bring to life. These are far more authentically expressive than the routines performed for rotating clubs, holiday parades, and church brunches.

Among the troupe members who get the spotlight is a former vice-cop whose total identity change is driven and now hindered by her deteriorating health; a formerly incarcerated Korean War veteran whose friend sent him the group’s fundraising calendars and letters while he was incarcerated; a young single grandmother completely new to the scene; and the girls’ lead costume designer, a mother of three whose husband fought her off by joining the troupe “every step of the way”. In each of their interviews, it is clear that although it is not held in high regard by their spouses and children, it is what women live for.

It would be easy to rate the film as a feel-good, fluffy, and inspiring tale of graceful aging as an often affluent, white Floridian, but thanks to its access, the conversation goes deeper than that. Amid health problems and children leaving the nest, women wonder what their purpose is: do they even have the right to enjoy something out of pure passion, and not out of duty or obligation? For some, their families provide the answer. When Grandma Patti has to take care of her new granddaughter, she drops everything without question, despite her obvious newfound joy in playing and the camaraderie that comes with it.

In a particularly heartbreaking case of an emotionally disintegrating marriage, costume designer Fran explains how her husband calls her lazy even though she enjoys doing the tedious work of designing and creating the troupe’s headdresses, and the documentarians accompany her when she leaves reluctantly. Florida a good part of the year for her husband’s winter home. Sitting in the living room with Fran and her husband is a viscerally frightening experience, highlighting the boxes older women are pushed into when they don’t do exactly what is expected of them.

Duty even extends to death, with one of the most candid conversations between several of the women exploring the topic of suicide and gendered expectations of how one might kill oneself to leave as little cleanup as possible. It’s a maudlin subject tackled with good humor and honesty, and the filmmakers break it up with another expressive dance sequence, releasing their subjects more metaphorically.

Above all, the film shows how the Calendar Girls are an emotional catalyst for everyone who participates. This fantasy in sequins and patriotic leotards is a phenomenon worthy of ethnographic study, and while it doesn’t dig too deeply into the beliefs of its subjects, the film is a very watchable and admiring snapshot of girls who just want to be have fun.