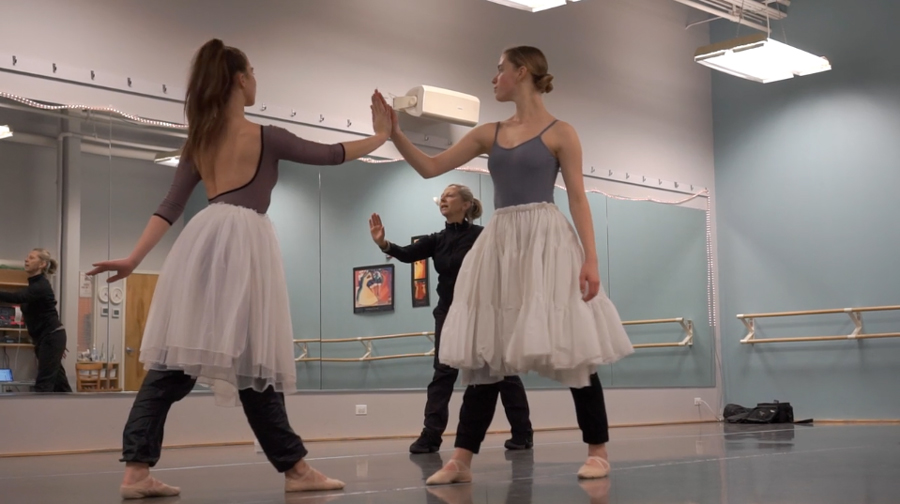 A particular quote from Shakespeare’s “A Midsummer Night’s Dream” rings true throughout the Evanston Dance Ensemble’s adaptation of the comedy classic: “Though she is but small, she is fierce.

The show will be presented by the Youth Dance Group at Northwestern’s Josephine Louis Theater from March 15-18. The plot – which follows the desperate, comic attempts of young lovers to act on their infatuations – is the only element of the production borrowed from the bard. The adaptation features an original score, original choreography, and an entirely new production design.

“Everything really comes from nothing, except the script,” said Béa Rashid (Communication ’78), co-artistic director and founder of Evanston Dance Ensemble. “Although we are very attentive to the narration, the show is really unique because it is the meeting of a group of choreographers and collaborators. … Everything is from our own point of view.

Steve Rashid (Bienen ’83), who wrote the original score for the production, is an Emmy-winning stage and film composer. He said the production’s music reflects a wide range of styles, from Shakespeare-era instrumental sounds to New Orleans jazz touches.

When asked how the musical score came together, Steve Rashid said the artists would choreograph a dance before writing the music. After watching the dance, he would put his hands on the keyboard and give “honest and valuable feedback” to the movements he observed.

Rashid said the idea of ​​producing a dance adaptation of “A Midsummer Night’s Dream” had been on her mind for a while before she chose to collaborate on the project with co-artistic director Christina Ernst. Rashid, who was in a previous production of the show, remembers it as “one of the most joyful experiences” of his life, full of “life, love and humour”. Ernst expressed similar enthusiasm for the play’s whimsy.

“It’s a great story that has it all: distant places, magic, humor, law and intrigue,” Ernst said. “It takes a lot of imagination.”

The show features a mix of dance styles, from classical ballet to modern jazz. Ernst added that the combination of various dance and music styles, as well as innovative elements like voice-overs that draw on the original text, make the show a unique and unpredictable adaptation.

Anne Raspe plays Queen Hippolyta, who is about to marry the Duke of Athens, and Titania, the fairy queen. The 18-year-old has been dancing for 13 years and said she loves dancing because it’s a way for her to “know her body” and express herself in a way that connects her to others.

In portraying Titania, Raspe said she had to balance her character’s strong-willed nature with her delicate femininity. She said that Titania was confident in her strength and beauty, and wielded equal power in her relationship with her husband.

The social media world began to emphasize self-love, Raspe added, which she said embodied the character of Titania. Raspe said she hopes women who watch the show will learn from this post.

“In today’s world, women and girls need to stand up for themselves,” she said. “(Titania) is relevant today because that’s what we need to do as women – we need to know that we are beautiful, no matter what we look like, no matter how tall you are. You are beautiful because you are you, and that makes you powerful.