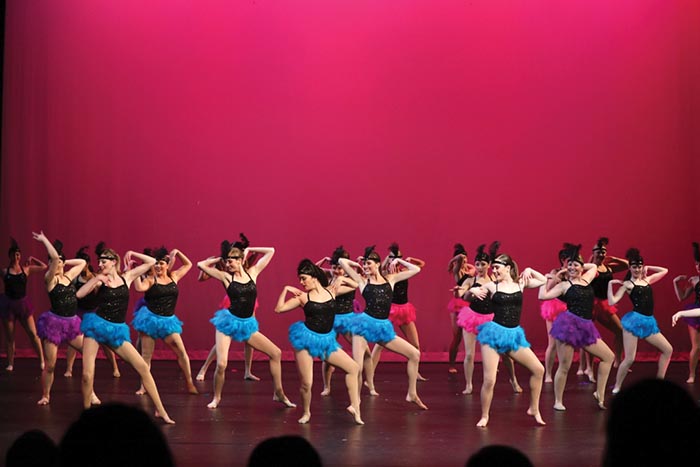 Taking the stage with confidence, each dancer owned the stage with each fluid step. A moving spectacle, the Boston College Dance Ensembles Roulette kept the room spellbound throughout the night as they engaged the audience with varied and visually stimulating dance performances while maintaining a level of energy and excitement. enthusiasm from the first to the last lap.

The opening show, “Luck be a Lady,” choreographed by the officers of the dance ensemble, featured all members of the ensemble and highlighted the complexity of their performance. The dancers took to the stage with beaming personalities who, paired with their colorful tutus, got off to a flying start. The dance was dynamic with many moving parts, using the entire stage. The troupe’s ability to drop gracefully to the floor allowed the girls behind those front and center to add flourishes with arms, legs and quaint banter to add even more movement to the cast. performance. The joy in the eyes of the dancers contagiously invigorated the audience.

“Hotel California,” choreographed by Carissa Burns, MCAS ’17, brought a commanding performance to the famous Eagles song. The dancers donned red dresses and moved elegantly in front of the red backdrop. The production behind this piece is indicative of the simple yet effective stage design and use seen in the rest of the show.

The next performance, “Waking Up,” choreographed by Olivia Duddy, MCAS ’17, uses light to impressive ends from start to finish. Bathed in a light golden hue, the dancers brought the slow song to life, while creating an aura that truly embodied the titular process of awakening. The lights, which dimmed and intensified at key points, highlighted the dancers’ movements, creating a visually more striking image on stage.

The first guest dance group, BC Irish Dance, truly took over the stage with a powerful performance. After several seconds of tapping in sync with the song, the music stopped leaving the five dancers alone on a silent stage. Robsham echoed with the sounds of stomping and clicking, emanating from the troupe’s shoes. The cohesion between the dancers created a melody of beautiful sounds and stomps as they owned the stage with their own dance prowess.

After intermission, “Six En Pointe,” choreographed by Kelsey Ortiz, LSOE ’16, showcased the ever-impressive technical skills of the pointe. Deft movements and smooth transitions with the music created a stunning level of precision as the dancers moved in sync across the stage en pointe. Without flinching in the face of the demanding dance, the dancers exerted another stage presence under the gaze of the public. The dance exuded a subtle contrast to the loud personalities of the other dances.

Synergy performed towards the end, using their numbers for a mix of songs and dance styles. The hip-hop company moved every part of their body, stretching and bending, creating another set of interesting and intricate advancements around the stage. As the name suggests, the energy is not simply poured onto the stage by the band, but fused into a unified force. The shared movements of so many create a beautifully harmonious image.

In a sentimental moment, the seniors of the Dance Ensemble took the stage to offer a final performance. Aptly named “Starting from the Bottom,” the seniors’ performance was full of brotherhood and kind affection.

The final dance, the titular “Roulette,” brought the whole ensemble back onto the stage. Just like in the beginning, the troupe dressed in costume, this time as showgirls, to keep with the Las Vegas theme. The dance was another flash of fast, flowing movement, and the girls kicked, twirled, and waved while embracing the larger movements of the set. As the final piece, the dance captured the nature of the show as a whole. Much like a river, there was a larger current to follow and plenty of room for smaller tributaries to branch out and reintegrate later. Each dancer exuded her own personality, while fitting evenly into the larger context of the dance.

Dance Set Roulette took the best aspects of dance and presented them in a fast and balanced way. The production of the show was simple and striking, with all aspects done in such a way that the movements of the dancers were not only more visible, but augmented by design. The length of each dance was refreshing as they seemed to be structured to be the perfect length. Never overstaying its welcome on stage, each dance seemed to have a story to tell. Stopping after this story was told made their ending all the more poignant.