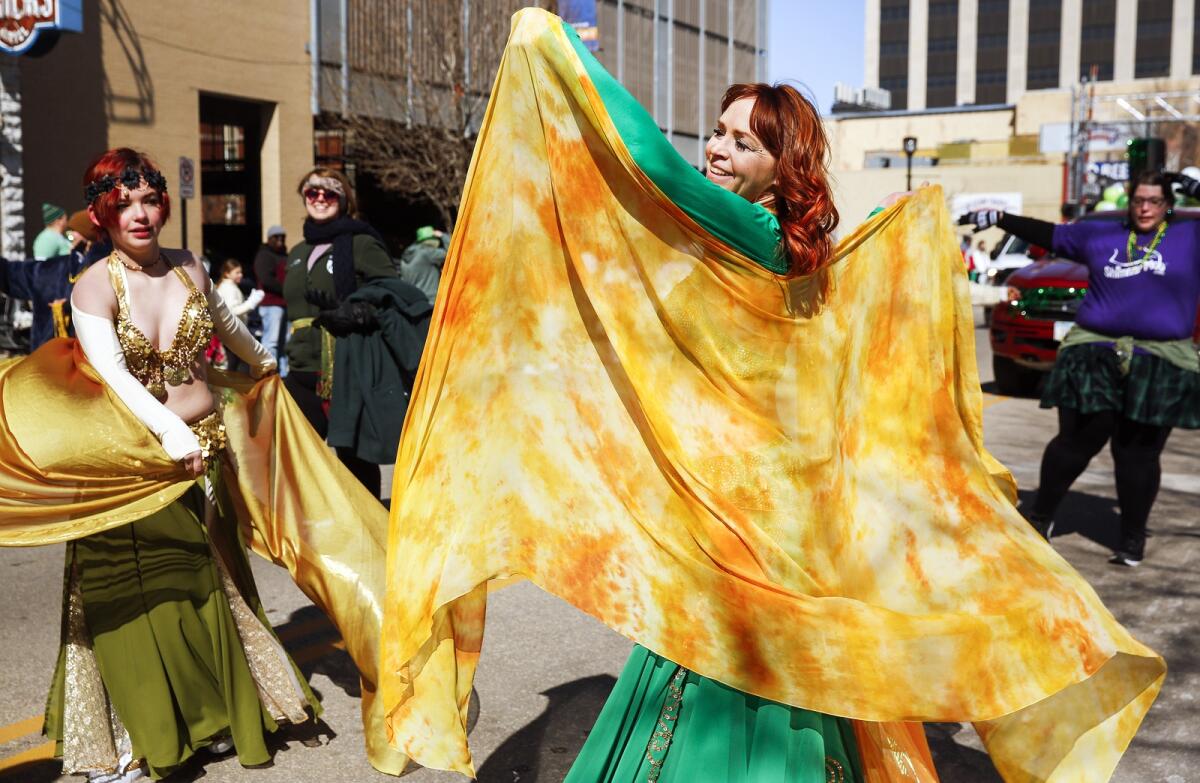 DeeDee McDowell (center) and her mother, Shari McDowell, lead a troupe of belly dancers March 12 during the 47th annual SaPaDaPaSo St. Patrick’s Day Parade in Cedar Rapids. The troupe raises funds to combat domestic violence, which is on the rise in the Corridor. (Jim Slosiarek/The Gazette)

CEDAR RAPIDS — A belly dancing group jiggles to raise awareness about domestic violence and help support women’s shelters, during a flash mob May 14 in Cedar Rapids.

The group is looking for dancers, sponsors and volunteers to participate in the Shimmy Mob, an international event that takes place on World Bellydance Day, the second Saturday in May. For the past 11 years, teams of belly dancers have performed on this day to support victims of domestic violence and raise money for women’s shelters. The Cedar Rapids Chapter raises funds for Waypoint Services, a nonprofit organization in Cedar Rapids that provides housing services, domestic violence services, and child care.

In a Monday article, The Gazette reported that cases of domestic violence in the Corridor have increased.

At the start of the COVID-19 pandemic in 2020, many pointed to enforced home isolation as a factor. But in 2021, as vaccines became widely available and public spaces began to open up again, the number of domestic violence continued to rise.

“What has been shown is that (domestic violence) has continued to increase and will continue to increase,” Alta Medea-Peters, director of community engagement for the program, told the newspaper. domestic violence response in Iowa City.

Shari McDowell of Cedar Rapids started a local Shimmy Mob in 2019. Since then, the Cedar Rapids Shimmy Mob has raised around $500 for Waypoint. About 15 people attend, but McDowell hopes to grow the group this year.

Entrants can register with the Cedar Rapids team at shimmymob.com by March 31. The entry cost is around $40 and includes a beginner-friendly t-shirt and choreography.

McDowell started belly dancing 20 years ago and invited her friends to join in the hobby. “I danced through two pregnancies and a divorce and made lifelong friends,” she said.

“Belly dancers have historically had a reputation for being racy,” Brown said. “That’s not what it’s about.”

The Shimmy Mob is a “non-threatening way to get started” in belly dancing, Brown said. The dancers wear their Shimmy Mob t-shirts and black pants when performing.

“Even if a person is afraid to dance in public, that’s fine,” Brown said. “You can donate and keep training with us, or if you want to shake a leg in public, you can do that too.”

April Keltner, who is taking part in Shimmy Mob for the second year, never imagined being a belly dancer “because I’m heavier,” she said. After working through the “foolishness and awkwardness” that can come with trying belly dancing for the first time, Keltner said she’s grown to love it.

“I’ve never been super feminine, but it brings out my inner woman and gives me more confidence,” Keltner said. “I know that traditionally belly dancers have been known to show a lot of skin. What I love about Shimmy Mob is that we don’t wear revealing clothes.

Laura Jackson, who is participating in Shimmy Mob for the second year, said belly dancing can look and feel intimidating, but Shimmy Mob is beginner-friendly and a way to “stay in touch with your body” and “stay active.” “.

“It helps me get out of my head and focus on how all the parts of my body feel today,” Jackson said.

For those who don’t want to dance, they can participate by donating and raising awareness about domestic violence, Jackson said.

“It’s for a good cause,” Jackson said. “Domestic violence affects many people, including survivors and relatives of survivors. It’s just a good thing to help make this conversation more accessible.

Emily Andersen of The Gazette contributed.