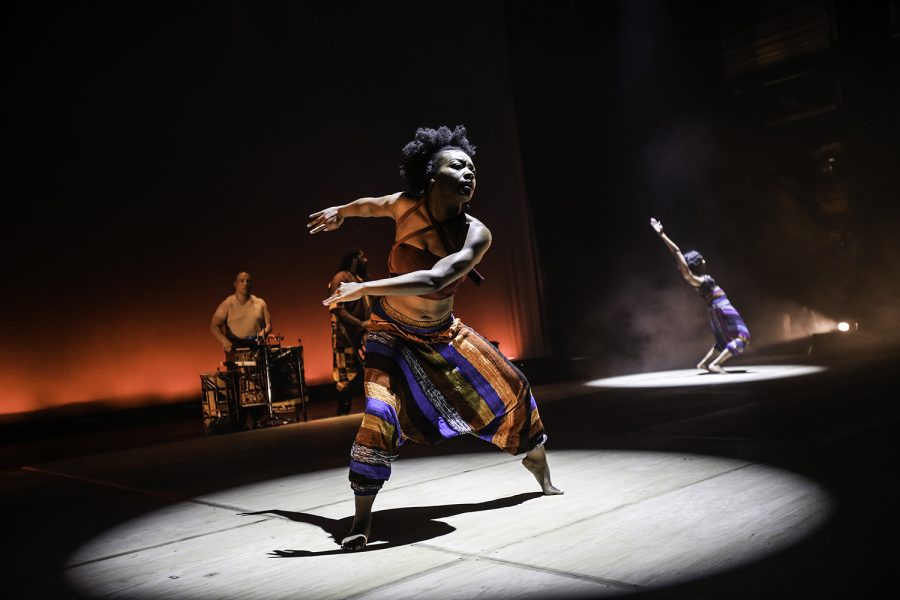 Afrika stage! will play ‘Drumfolk’ in Hancher after a week of community engagement with UI students and other groups.

In 1739, 20 enslaved Africans in the American colony of South Carolina used their drums to start a revolt against their slave owners. This campaign for freedom, known as the Stono Rebellion, caused widespread apprehension within the British American colonies and met with the Negro Act of 1740. This act severely restricted the expression of African slaves and prohibited their use. of the drum.

This Saturday at Hancher, Step Afrika! will tell the story of the Stono Rebellion and the Negro Act of 1740 through a theatrical experience called Drum. For Jakari Sherman, director of Drum and percussionist for Step Afrika!, the show is a story of recovery.

The dance troupe performs steps, a form of percussive dance that began to develop after enslaved Africans could no longer use the drums to communicate. The dance style is practiced by historically black fraternities and sororities.

â€œWe have the opportunity to present the history of stepping – which is our favorite tradition to play – but through this history we are able to see a lot of the use of drums in the show and the introduction of a lot of early African American percussion traditions, â€Sherman said.

Some of those traditions include the hambone, the ring cry, and more recent contemporary footsteps, Sherman said.

â€œI really love the journey we are taking through this story and all the different shapes you see along this path,â€ he said.

Because Drum explores a very specific facet of American history, Step Afrika! Founder and Executive Director C. Brian Williams recommended viewers read both the Stono Rebellion of 1739 and the Negro Act of 1740 before the show.

In the case of the Negro Act of 1740, instead of creating more freedoms for African slaves, the settlers tried to suppress their freedom even more. Freedom is what enslaved Africans fought against in the Stono Rebellion of 1739, and it is an ongoing struggle today, Williams said.

â€œEven to this day, you see people fighting against systemic injustice and inequality in the country. But we always see people moving to improve it, â€said Williams. “Drum is our effort to tell the story of the beginning of American history that precedes the existence of the country. It’s a great moment in history that more Americans should know more about.

Afrika step! has been in Iowa since Monday and the company has been busy training, performing and educating all week. Last night, the company helped dedicate a sculpture at the Muscatine Art Center to Mary Jo Stanley, who was a great friend of the arts, Hancher executive director Chuck Swanson said.

Afrika step! will perform Drum live in Hancher on Saturday evening. According to Swanson, the performance is a historic moment that touches on the past and raises social issues of today.

After the show there will be a ‘talk back’ for people to discuss what they saw on stage with Williams and some of the Step Afrika.! dancers. In Swanson’s eyes, there is no better way to start the fall season in Hancher.

â€œIt’s a pretty amazing way to kick off our season,â€ Swanson said. “This is exactly one week’s work that Hancher strives to do.”

Tickets for Drum can be purchased through the Hancher ticket office, and the show will begin at 7:30 p.m. on Saturday September 11.

Filmmaker Addison Wright turns his lens on an inspiring Chicago dance troupe in Hiplet, and hopes his films will open hearts and eyes