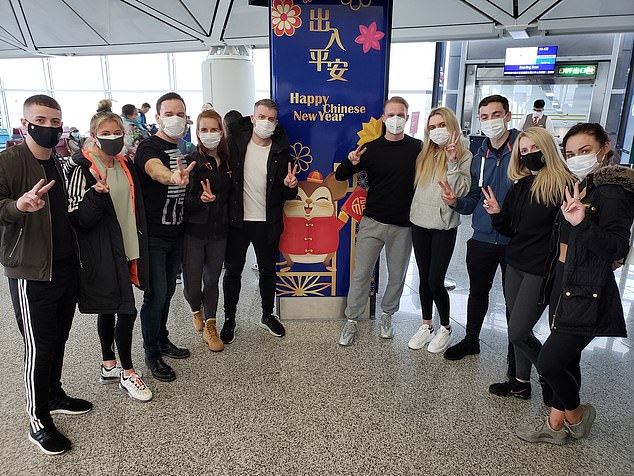 Lord of the Dance star Michael Flatley’s Irish dance group on tour in China have had to cancel their performances in Beijing, fearing they will remain stranded if the rapidly sweeping coronavirus epidemic continues to escalate.

Eight performances of Lord of the Dance: Dangerous Games were scheduled in the Chinese capital but all were canceled at the last minute to give the dancers time to flee the country.

MailOnline understands that the 23-person troop feared they could be stranded in China if authorities chose to lock down more provinces to prevent the spread of the deadly SARS-like infection.

The group are currently in Taiwan – which has also recorded coronavirus cases – for five shows as part of their world tour. The group will travel to Mexico next week before flying to Europe.

The cancellations come as nearly 4,600 people have been stricken by the killer virus. Leading experts today warned that the outbreak – which has claimed at least 106 lives – will continue for several months.

Chinese authorities have already taken the unprecedented step of locking down Hubei – the province at the heart of the epidemic, effectively trapping millions of residents until the virus is gone.

Eight performances of Lord of the Dance: Dangerous Games were scheduled in the Chinese capital but all were canceled at the last minute (pictured, some of the dancers wearing face masks at an airport, believed to be in China)

MailOnline understands that the 23-person troop feared they could be stranded in China if authorities chose to lock down more provinces to prevent the spread of the deadly SARS-like infection (pictured, two of the dancers wearing face masks at an airport)

The group are currently in Taiwan – which has also recorded coronavirus cases – for five shows as part of their world tour. The group will travel to Mexico next week before flying to Europe

Six members of the Lord of the Dance tour have already spent time in a Beijing hospital due to illness.

Tests later confirmed they had a bacterial infection – they were all cured by taking antibiotics.

Discussing the ordeal, a tour member – who has not been named – told MailOnline: “Seeing the interior of a fever screening clinic in Beijing during a pandemic has been an interesting experience.

“The real pleasure was going through all the checks at the airport and having to explain through the language barrier that the fever, cough, runny nose and headaches were from something other than the coronavirus. “

The group of 23 dancers includes 14 men and 19 women, aged 18 to 25. They had already performed six consecutive sold-out nights in Shanghai.

Their dates in Beijing, hosted at the prestigious National Center for the Performing Arts, were scheduled from Saturday January 26 to Thursday January 30.

Residents of Xikangzhuang, near the border of Shanxi Province, built entire brick walls, apparently to “prevent foreigners from coming to our village”

Japanese authorities are preparing to load various supplies such as face masks onto a charter plane bound for Wuhan at Haneda Airport in Tokyo. The flight must evacuate Japanese nationals from the Chinese city which has been hit by the outbreak of a deadly new coronavirus

Pictured is the wall in Xikangzhuang, which is in Hebei – the province surrounding the capital Beijing, where dozens of cases have been recorded

CORONAVIRUS: WHAT WE KNOW DATE

What is this virus?

The virus has been identified as a new type of coronavirus. Coronaviruses are a large family of pathogens, most of which cause mild respiratory infections such as the common cold.

But coronaviruses can also be fatal. SARS, or Severe Acute Respiratory Syndrome, is caused by a coronavirus and killed hundreds of people in China and Hong Kong in the early 2000s.

Yes. 106 people have died so far after testing positive for the virus.

What are the symptoms?

Its symptoms are fever, cough, and difficulty breathing, but some patients have developed pneumonia, a life-threatening infection that causes inflammation of the small air sacs in the lungs. People with the new coronavirus may only have mild symptoms, such as a sore throat. They may assume they have a cold and not see a doctor, experts fear.

How is it detected?

Genetic sequencing of the virus has been disseminated by Chinese scientists to the rest of the world to allow other countries to quickly diagnose potential new cases. This helps other countries respond quickly to epidemics.

To contain the virus, airports detect infected people with temperature checks. But as with any virus, it has an incubation period, which means detection is not always possible because symptoms have not yet appeared.

CLICK HERE TO SEE THE FULL MAILONLINE Q&A ON CORONAVIRUS

In other developments in today’s escalating crisis, a German has become the first person in Europe to catch the virus without even traveling to China.

The unidentified 33-year-old caught the illness in his home country on Jan.21 from a colleague visiting China and later fell ill on his flight home.

She was originally from Shanghai but had recently visited her parents in Wuhan, according to reports.

The German man’s case is one of four – men in Vietnam, Japan and Taiwan have also been infected at home.

Countries around the world are starting to sever ties with China and withdraw their citizens from the crisis-stricken region of Hubei, where the virus emerged in the city of Wuhan.

The Hong Kong leader today held a press conference in which she wore a face mask and said the city will stop all high-speed trains and ferries to the mainland.

In a dramatic intervention, she also announced that Hong Kong would halve the number of flights and stop issuing visas to visitors from China.

In Australia, paramedics wearing hazmat suits were seen at the luxury Peppers Broadbeach hotel on the Gold Coast.

And a Thai health minister admitted today that the country was “unable to stop” the spread of the virus there, where 14 people have been infected.

But China maintains a strong front – President Xi Jinping said today that the nation “will win the battle against the devil’s virus.”

And a Chinese scientist said he believes the epidemic and the “Battle for Wuhan” will peak in 10 days. 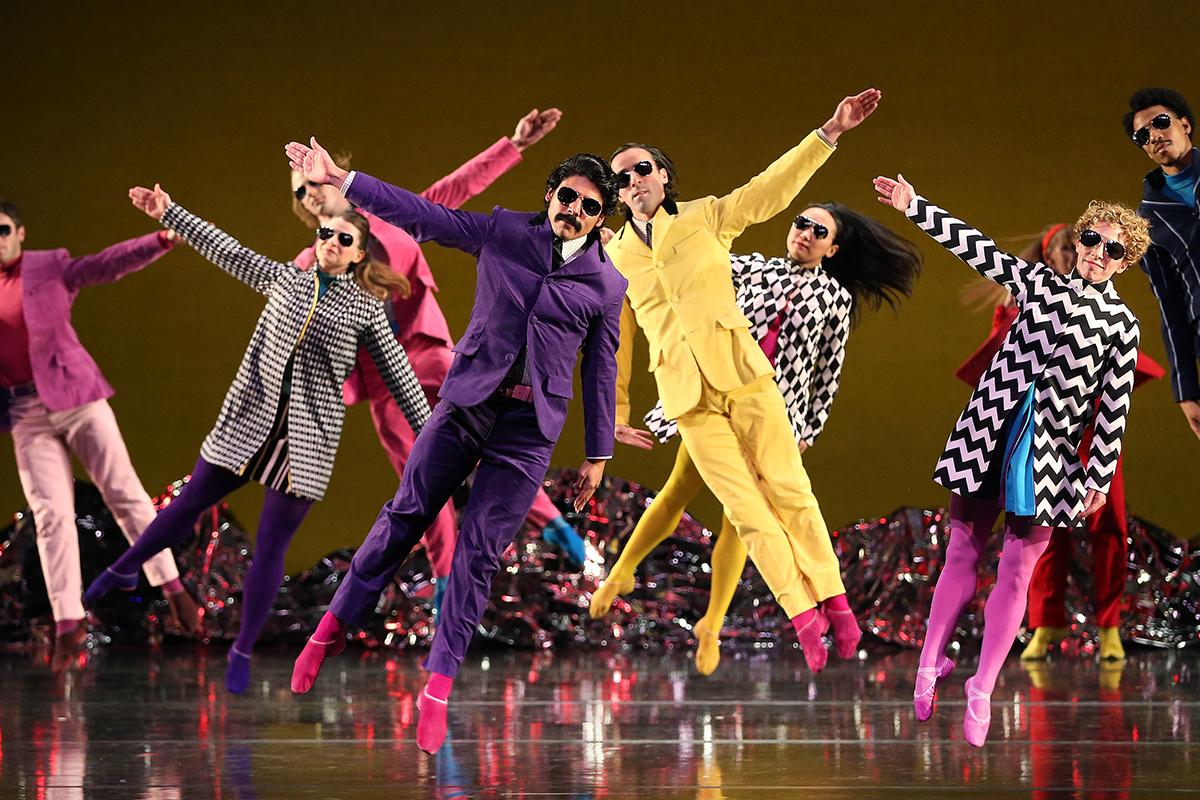 Created for the city of Liverpool to celebrate the Beatles’ 50th anniversary Sgt. Pepper’s Lonely Hearts Club Group, Pepperland is a joyful demonstration of the choreographic spirit and musicality of Mark Morris. Ethan Iverson’s original score reinvents selections from the iconic 1967 album in bold new arrangements performed by a lively jazz ensemble of trombone, theremin, vocals, saxophone, keyboards and percussion. Morris’s dancers, dressed in a Carnaby Street riot, demonstrate why this dancer is considered “the most successful and influential choreographer alive, and arguably the most musical” (New York Times). It is an evening “not to be missed” for lovers of dance AND contemporary music!

This activity is made possible by voters in Minnesota through an Operating Support Grant from the Minnesota State Arts Board, through a legislative appropriation of the Arts and Cultural Heritage Fund.

Northrop Season Group Discount: Groups of 10+ save 15% off the original ticket price or 25% for schools and educational groups at Northrop season events. Remember that tickets are always 50% off for children 17 and under when purchased with at least one adult ticket. Simply complete the group ticket booking form.