With over two decades of Mark Morris Dance Group fandom under my belt, I was more than ready to celebrate MMDG’s 20th year of partnership with the Krannert Center for the Performing Arts on the opening night of Pepperland.

In last week’s preview of Pepperland, I had concentrated largely on the musical evolution of the work. As I took my seat last Friday night, surrounded by the sounds of the MMDG Music Ensemble heating up, all I could think of was the promotional photo below, which had been featured in my story and now in my program.

If these shapes were any indication of the level of energy, humor and dynamic movement Pepperland reserved for us, tonight’s performance would be worth watching. And it most certainly was.

MMDG performs with a luxuriously deep bench of seventeen dancers, a number that allows us to appreciate Morris’ breathtaking choreography across a wide range of bodies and personalities. Perhaps more importantly, it easily lends itself to complex explorations of relationships inside and outside of ourselves.

“Sgt. Pepper” told us in depth about our inherent need to connect, whether through love, spirituality, or seemingly mundane interactions with other humans. Pepperland this conversation deepens as the dancers, appearing at first as a unit, spinning around each other like an LP on a turnstile, slowly drift into trios, pairs and soloists. Pepperland The structure takes us from “Sgt. Pepper’s Lonely Hearts Club Band” to “With a Little Help From My Friends”, from “When I’m Sixty-Four” to “Within You, Without You”, from “Penny Lane” to “A Day in the Life” —and along the way, the dancers explore the heights and depths of romantic love, fear of aging and remembrance, and the tragedy of war.

From its first moments, Pepperland shines with Morris signature wit and insight. A quick Google Images search serves as a reminder of how many cultural and historical “Easter Eggs” are buried in the sleeve of “Sgt. Pepper’s Lonely Hearts Club Band”. “Magna Carta”, Pepperland second movement, invokes several of these famous faces hidden in the background. As we learn about Albert Einstein, Marilyn Monroe, Shirley Temple, and Laurel + Hardy, to name a few, the dancers are at their comedic best. But it’s not just for fun. It is a question of putting in cultural context, perhaps even of presenting these figures as archetypes of knowledge, desire, youth and lightness.

Morris’s choreography draws on a rich and unique vocabulary. In a movement, say that of the promotional image mentioned above, it can convey both the desire to reach out and the desire to hold back; the feeling of elation and the feeling of being out of step. The dancers rise up and struggle to carry each other’s burdens. They move together in connected and disconnected states, sometimes simultaneously.

For years Morris’s choreography has worked beyond heteronormative couples, and on opening night of Pepperland it was a joy to see them received with smiles but no surprise. Although the sight of a little dancer lifting and carrying a dancer off the stage brought the house down. Let’s just hope it was more of a “you go, girl” moment.

There were too many wonderfully funny and deeply moving moments to list, but some of my favorites were these. The solitary lotus yogi poses surrounded by an explosion of dancers in “Within You, Without You”. The seemingly mundane gestures and movements throughout “Penny Lane” (see below) that remind us that no one runs or walks more beautifully or with more determination than an MMDG dancer. Watch the dancers slow down like tired old clocks as they struggle to keep up with the 6,5,4 beat in “When I” m Sixty-Four, “and finally, the dancers crawling across the stage like soldiers under fire in “Like the day of life.”

None of these moments would have reached their full impact without the MMDG Music Ensemble’s performance of Iverson’s score or Elizabeth Kurtzman’s costume design. Baritone Clinton Curtis’ surprising delivery of familiar lyrics kept nostaliga at bay. Her uninflected voice demanded that we feel those words again.

Kurtzman’s highly saturated, Mod-inspired costumes carried hints of Carnaby Street with a twist on the original Sgt. Pepper’s military band uniforms. Through its range of palettes and patterns, the dancers seemed to be a kaleidoscope across time and space. The choice of reflective sunglasses, a seemingly small but effective detail, bed rock star / celebrity / stoner while also suggesting that we often keep our true selves hidden from others and seek meaning in our own reflections.

And of course, there was a theremin who, in the capable hands of Rob Schwimmer, brought the perfect amount of psychedelia and mystery to this night of travel in, out, and through time. Her very presence continued to be a topic of conversation before and after the performance.

Editor’s Note: For those of you who may not be familiar with this wonder, the theremin is an electronic instrument that is “played” by the energy of the player’s hands activating the antenna.

My night in Pepperland I will happily return there several times in memory, and maybe, if I’m lucky, I’ll see it live again. My sincere thanks to Mr. Morris and to the members of the MMDG and MMDG Music Ensemble for continuing to bring such treasures to Champaign-Urbana. Happy 20th anniversary.

All photos of the Mark Morris Dance Group except the photo of the theremin, which comes from Wikipedia 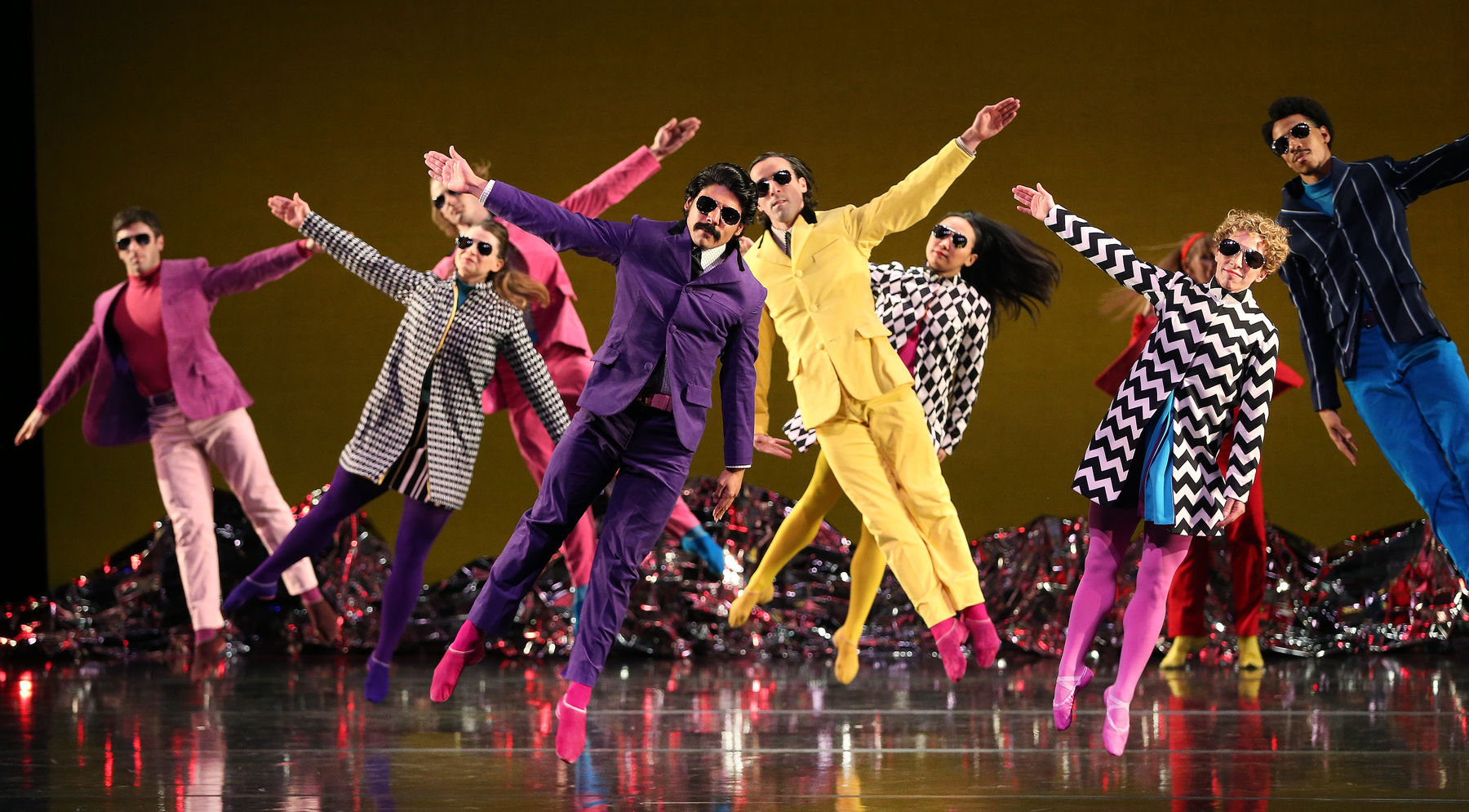 In March, New York-based dance group Mark Morris returns to their Midwestern home at the Krannert Center for the Performing Arts. During its weeklong residency, the company will conduct public engagement work with the Champaign, Urbana and U. of I community and present two paid performances of “Pepperland”.

“Land of Peppers” pays homage to the iconic Beatles album “Sgt. Pepper’s Lonely Hearts Club Band,” with a score by Ethan Iverson that fuses arrangements of classic Beatles tunes with six original tracks. Alongside the dancers, a music ensemble by Chambre en direct brings this work to life at the Tryon Festival Theater on Friday March 8 and Saturday March 9.

Through workshops, masterclasses and other outreach programs, band members and the MMDG Music Ensemble will work with groups at Cunningham Children’s Home, Lincoln’s ChalleNGe Academy, Clark-Lindsey Village, Champaign Park District and Urbana Fine. Arts Center, dance students in Illinois, Lyric Theater @ Illinois, Illinois Theater and School of Music. Two of the group’s events will be free and open to the public: the Dance for People with Parkinson’s Workshop on Friday March 8 at 10 a.m., the Drama Rehearsal Room and the Family Intergenerational Dance and Fitness Class. Fun, Saturday March 9 at 10 a.m. at the Orchestra. Rehearsal room.

For tickets and more information, visit KrannertCenter.com or call 217-333-6280.